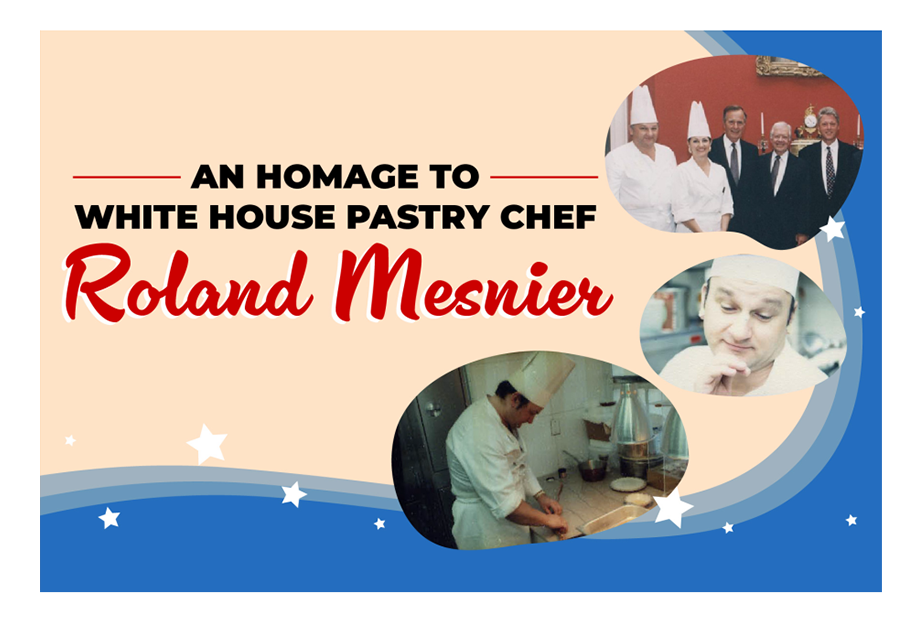 The widely-celebrated Pastry Chef Roland Mesnier passed away on August 26, 2022. For nearly twenty-six years, Chef Roland Mesnier served as the Presidential Pastry Chef to America’s first families. Highly revered by all five of the presidential administrations he served—Carter, Regan, H.W. Bush, Clinton, and G.W. Bush—Chef Roland retains the honor of being the longest-serving White House pastry chef in American history.

Chef Roland’s self-proclaimed mission was to use his baking and confectionary talents to comfort a family living under constant scrutiny. As he once said to The Candian Press,

”If I could take away that pressure for five minutes, then I did my job. That was my role in the White House—to put a smile on the faces of the first family.”

Chef Roland was a baking icon, revered in the eyes of many and held in high regard by all those at Collin Street. Unbeknownst to many, six of our recipes are his own recipe. These recipes include our White House Pumpkin Cake, Pumpkin Loaf, Banana Nut Bread, Chocolate Cake, White Cake, and Carrot Cake. Given as a gift to our humble Texas bakery, we’re proud to carry on his legacy in our cakes. As our way of honoring the life of Chef Roland, we’re taking a look back at his humble beginnings, his star-studded career, and his lasting legacy.

Despite the well-documented nature of Chef Roland’s culinary achievements, comparatively little is known about his personal life. Even Roland’s own website quickly glazes over the finer points of his biography. It appears, while Roland frequently associated with famous figures, he never pursued the limelight himself. Instead, he allowed his edible creations to take center stage.

Born into a large family on July 8, 1944, in the small village of Bonnay, France, Roland was one of nine children. His father worked for the railroad system, and his mother was a homemaker and, by his account, “a wonderful chef.” When Roland was twelve, he and his mother visited his older brother, Jean, while he was working in a local patisserie. The brief visit immensely impacted a young Roland who, shortly thereafter, convinced his mother to secure him an apprenticeship at a patisserie in the neighboring town of Besançon.

Roland's three-year-long apprenticeship was typical for the time. In exchange for baking lessons, he worked six days a week from 6 am to 8 pm, earning his room and board plus today’s equivalent of $1 per month. His initial duties were rather menial, such as grocery shopping, scrubbing floors, and washing dishes, and were designed to gauge his sincere interest in the profession. As Roland cut his metaphorical baking teeth, he earned the privilege of learning at the elbows of various master bakers. There he learned the art of making puff pastry, brioche bread, and chocolate molding. Fondly recalling this time in his life, he once told The Charlotte Observer,

”You never forget when you make your first croissant.”

At seventeen, Roland passed his apprenticeship exam and began traveling throughout Europe, searching for opportunities to hone his craft. He acquired his first post-apprentice position in 1963 as a pastry cook in London’s ultra-posh Savoy Hotel. Four years later, in 1967, Roland left the secure bosom of Europe to take a position as the lead Pastry Chef for the tropically-located Princess Bermuda Hotel.

Little did Roland know, the iconic “Pink Palace,” located on the waterfront just off the island’s Hamilton Harbour, would turn out to be more than just another notch in the belt of his culinary career. During his tenure at the resort, Roland met Martha Whiteford, a school teacher from West Virginia. The two fell in love, married, and had their first and only child, George.

In 1973, Roland and his family relocated to Paris, France, where he was hired as the Executive Pastry Chef at the world-renowned Four Seasons Hotel George V. Just two years later, after missing the tropical beaches of Bermuda, Roland returned to the island, taking the position of Executive Pastry Chef of the entire Bermuda Hotel Group.

Then, in April of 1976, unable to pass on the opportunity to travel, Roland once again relocated his family to Hot Springs, Virginia, to work at the venerable resort hotel, The Homestead. Here he retained his title of Executive Pastry Chef. Years later, when reflecting on his early career to a reporter for The White House Historical Association, Roland mused that hopscotching across the world during his early career was “the launch pad to my ambitions and dreams.”

In 1979, Chef Roland learned the White House was looking for an executive pastry chef.

He interviewed for the job in December, charming First Lady Carter with his keen knack for modifying decadent desserts into lower-calorie alternatives. Promising to use naturally sweet substitutions, such as fruit and honey, First Lady Carter helped to expedite Roland’s citizenship application so she could officially offer Chef Roland the White House Pastry Chef position later that year. Chef Roland’s confectionary capabilities were so revered that he earned the right to retain his title through George W. Bush’s administration. In 2004, he decided on his own accord to retire.

During his quarter-of-a-century incumbency at the White House, Chef Roland created certain traditions that his successors carry on today. One of these traditions includes the creation of elaborate gingerbread houses served each year at Christmas. When Chef Roland’s passing was officially announced, Hillary Clinton tweeted a remembrance of this yearly custom,

”I have such fond memories of Chef Mesnier. He loved making people smile with his beautiful creations, including his famous gingerbread houses at Christmas. He will be missed!” 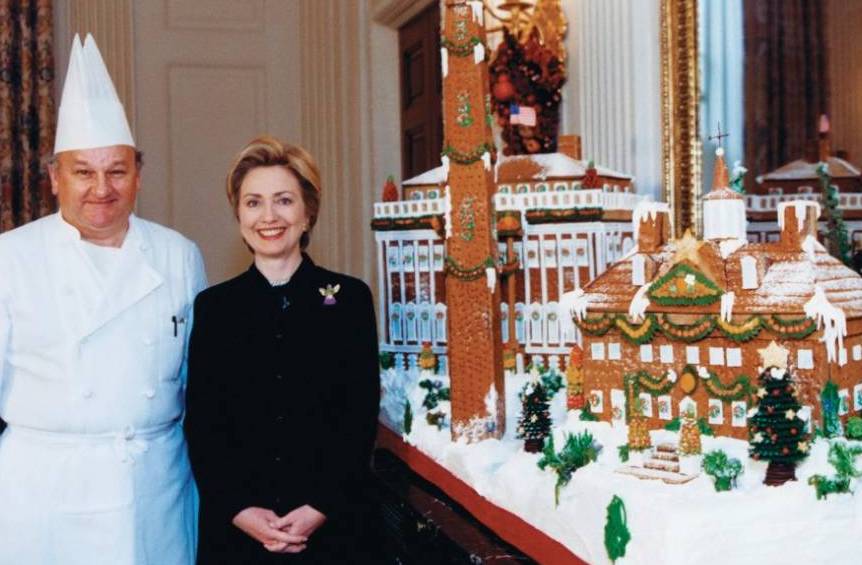 Despite his proximity to Capitol Hill, Chef Roland’s personal political opinions were rarely, if ever, vocalized. Instead, he became famously well-known for his witty observations regarding the niche food habits of the White House’s frequent guests. Per a quote given to the Associated Press, Chef Roland once said, “Over the 25 years I've been here, I've noticed that Democrats usually eat more than Republicans. I've also observed that if the guests are mostly ladies, they will usually eat more pastries than men.”

Despite his bipartisan stance, Chef Roland was not immune to criticism and critiques. In an interview with The New York Times, Chef Roland recalled that of all the people he’d ever served, the pickiest patron was First Lady Nancy Reagan. From her, he quickly learned, “If she didn’t complain, that was a compliment.”

To emphasize this point, Chef Roland recalled one defining memory in which he was summoned to see First Lady Reagan. After outright rejecting three different desserts specifically designed for a state dinner in which the queen of the Netherlands would be in attendance, Mrs. Reagan made a specific request. “Make 14 sugar baskets, eight inches in diameter, and decorate each handle with six tulips made of sugar before filling the baskets with sorbet and fresh fruit.” She then said, “Roland, you have two days and two nights.” Roland’s response was a respectful, “Thank you, Madam.”

”“It was another test,” Roland modestly demurred. “And, you know it makes you strong. Mrs. Reagan pushed me to be who I became.”

Chef Roland’s long White House career was largely credited to his never-ending creativity, cool confidence, and constant commitment to perfection. As per Chef Roland’s motto, “Perfection is no accident.” He was famously known for tasting every dish before it was served, for obtaining secret insight into each President’s specific tastes from the White House’s butler, and for starting his Christmas menus in June. 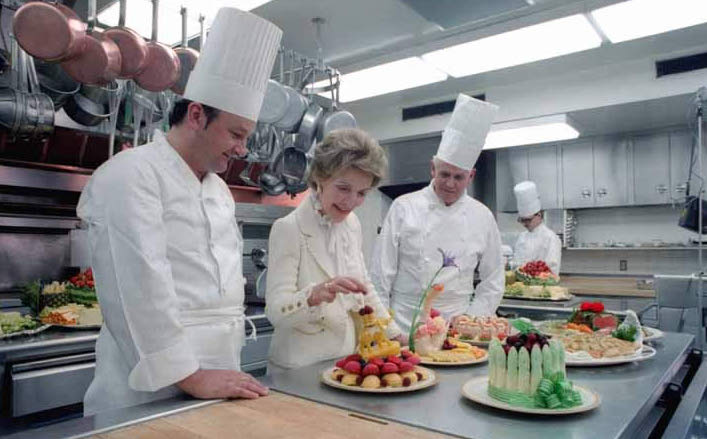 Only once did he admit to bending the White House’s firm rules of employment. In an interview with The Washington Post, Roland confessed that it was a strict security rule that every food gift sent to the White House had to be destroyed. However, in 1987, Soviet leader Mikhail Gorbachev visited President Reagan in Washington, bringing with him two enormous tins of Russian caviar.

“I looked at the other chef and said, ‘I don’t know about you, buddy, but I’m willing to die for what’s inside,’” Chef Roland recalled. “‘So I’m taking one home, and you can have the other one.’” 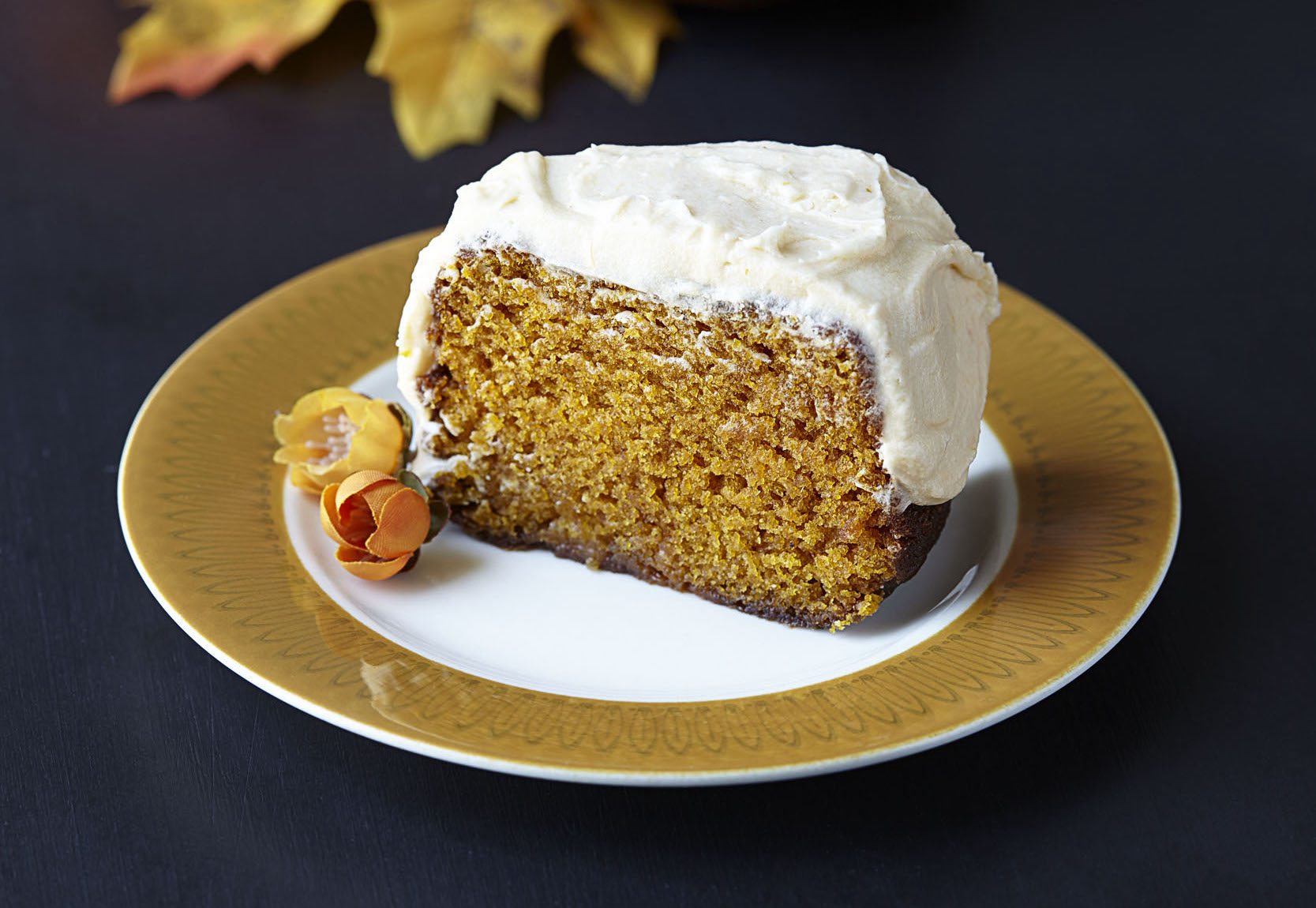 After retiring from the White House, Chef Roland switched gears, but hardly slowed down. Besides writing several books, he frequently visited Collin Street’s hometown of Corsicana, Texas. During these visits, Roland would stop by the bakery’s 7th Avenue location to share his baking wisdom, suggest improvements to various baked goods, and recommend adding various recipes from his White House archives.

Collin Street Bakery’s White House Pumpkin Cake is Chef Roland’s invention. Infused with robust pumpkin puree and traditional fall spices, this cake has proudly graced the White House’s holiday table for generations. Accompanied by a half pint of velvety pumpkin cream cheese icing, a slice of this cake was intended to be enjoyed in the company of family and friends.

As mentioned above, Roland Mesnier passed away peacefully on August 26, 2022, in his assisted-living residence in Burke, Virginia. He was seventy-eight. Per his son, Roland’s recent passing was the result of complications due to cancer.

Upon learning of his passing, the Reagan Foundation and Institute shared the following tribute, "We are sorry to hear of the passing of Roland Mesnier, who served as chef to the White House for 26 years and 5 US Presidents, with 25 of those years as the White House Executive Pastry Chef. His passion, commitment, and love for his work will always be remembered."

Though Chef Roland has passed on, his influence can still be felt both in his educational endowments and his written works. Dissatisfied with just being the nation’s highest-ranking Executive Pastry Chef, on his days off from the White House, Roland labored to develop the first professional Pastry Arts Program at L’Academie de Cuisine in Bethesda, Maryland. Once ranked in the top 10 culinary schools in the United States, L’Academie de Cuisine abruptly closed its doors in 2017. However, during its four-decade run, L’Academie produced some of the country's highest-profile chefs, including Aggie Chin, Pasty Director of The Slanted Door Group.

In a comment to the Los Angeles Daily News, Francois Dionot, the founder of the former L’Academie de Cuisine in Bethesda, described Chef Roland as the “king of sugar work,” including spun sugar, poured sugar, rock sugar, and pulled sugar. “Very few people know how to do this anymore,” Said Dionot. “He makes [sugar] roses that look real.”

Chef Roland is credited with authoring four books: Dessert University, Basic to Beautiful Cakes, All the Presidents Pastries: Twenty-Five Years at the White House, A Memoir, and Creating the Sweet World of White House Desserts. These books detail some of the stranger recipes he was requested to make at the behest of the first families. These included a “molded cheese ring” for the Carter family, made from “a mixture of Muenster, cheddar, all the stickiest cheese you could find, mixed with onions, capers and strawberry jam in the middle.”  However, the award for the most unappealing recipe goes to the Clintons, who fancied “an atrocious concoction of Coca-Cola-flavored jelly served with black glacé cherries.”

In 2005, Chef Roland was inducted into the French Legion of Honor—the highest honor bestowed on a French citizen—and into the Chocolate and Pastry Hall of Fame in New York. He was also awarded a Doctorate of Culinary Arts from the prestigious Johnson & Wales University in South Carolina. In total, Chef Roland has won eighteen gold medals, four silver, and three bronze for his pastry creations in worldwide competitions.

Fondly remembered for his Santa-like physique, twinkling blue eyes, and charismatic smile, Chef Roland had the distinctive look of a man who’s happily spent his entire life around pastry. And if you asked him, he unabashedly confessed that was true. “If I were a pastry, I would like to be a big, fat doughnut.” 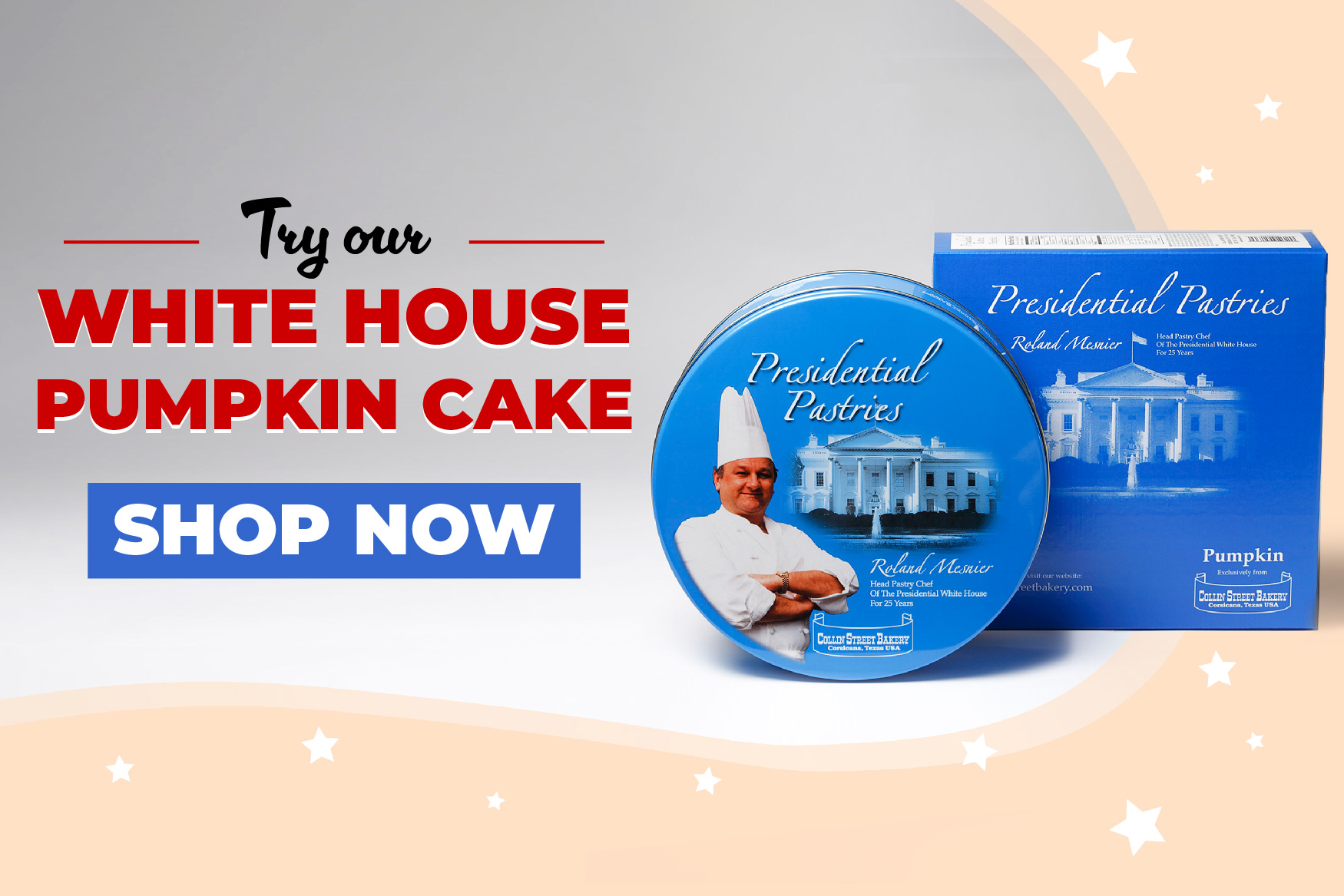 Interested in sampling a Chef Roland specialty? Then, order our White House Pumpkin Cake. The perfect treat for the upcoming fall season, our Pumpkin Cake is made with creamy pumpkin puree and traditional fall spices. Dine like the president today!