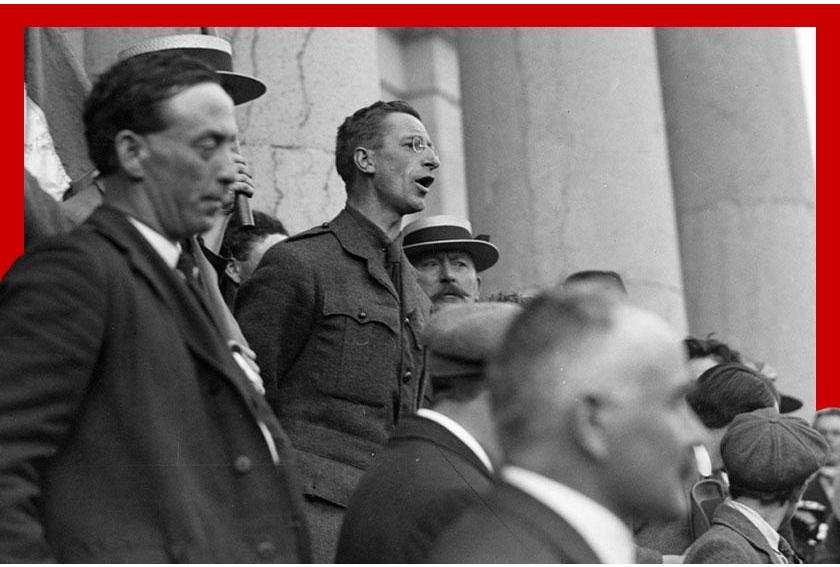 How Éamon de Valera Ate His Way to Freedom

History is riddled with stories of creative escape attempts. In 1934, American gangster John Dillinger escaped from prison with the help of a wooden gun. It was crudely carved, painted black, and poorly polished but extremely effective. It was realistic enough to frighten his guards into opening his cell door. Pascal Payet, a Frenchman with a penchant for Hollywood-style escape tactics, fled prison in a hijacked helicopter on three separate occasions. In 2017, eleven Alabama inmates confused a guard into accidentally opening an exit door by smearing peanut butter over the illuminated ‘exit’ sign; in doing so, they were able to disguise the door’s destination.

Despite the determination of these escape artists’ breakout attempts, all escapees were later recaptured. Their tactics, however, highlight the creativity and ingenuity of individuals wanting to break free. But perhaps the most creative prison escape of all time belongs to a man named Eamon de Valera. He escaped with the help of…. a fruitcake! 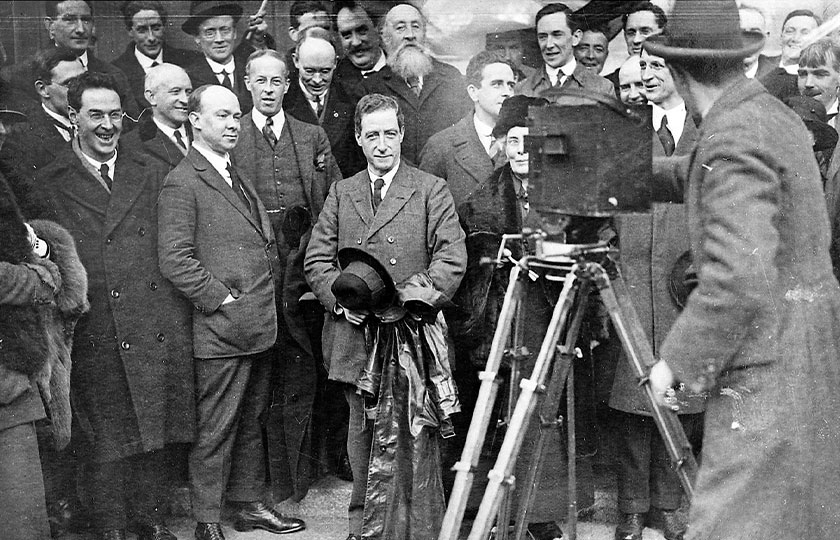 Who was Éamon de Valera?

De Valera was an Irish politician and statesman, who served as Ireland’s Prime Minister and President for a large portion of the mid-twentieth century. However, it had never been de Valera’s intention to have a political career.

Classically trained as a teacher, de Valera took his first steps into the political realm in 1913 when he joined a group known as the Irish Volunteers. Essentially a militia, the Volunteers were comprised of Irish Nationalists who believed in ‘Home Rule’ - the idea Irish citizens should be ruled by an Irish government. You see, during this time, British rule of Ireland had been in effect for over 300 years. This group was a collection of members of the Gaelic League, the Ancient Order of Hibernians, and the Sinn Fèin Party, which de Valera would later lead.

Not all Irish citizens supported the idea of Home Rule. An equally large number of Irish citizens believed in British rule; this group was known as the Unionists. Tensions between these two groups mounted for over two decades as the country teetered on the brink of civil war.

As a member of the Volunteers, de Valera’s responsibility grew in 1916 when he was tasked with leading a secret battalion of men to rebel in an event known as the Easter Rising. The Rising was intended to take place all across Ireland with Irishmen and -women rebelling against their local pockets of British rule; however, due to various circumstances, the rebellion did not go as intended. De Valera was captured and imprisoned. Because of de Valera’s massive popularity within the growing anti-British Irish population, British officials imprisoned de Valera and seventy-two other republican comrades at Lincoln Prison: a forty-seven-year-old, notoriously secure prison from which no one had yet escaped.

Well, that’s until de Valera was mailed a fruitcake. A special, Irish fruitcake. 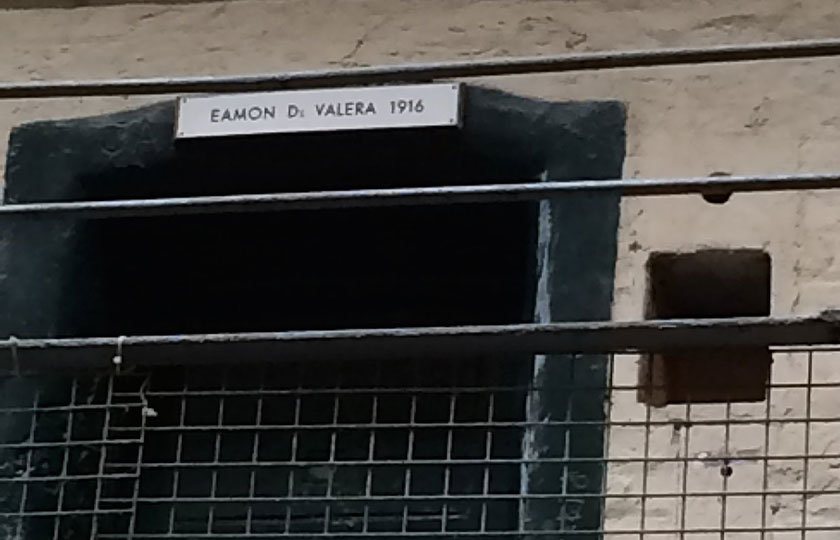 While in jail, de Valera, a devout Catholic, became an altar boy for the prison church. One day, de Valera discreetly pilfered the chaplain’s master key and upon returning to his cell, began making a replica. Using the heat from his hands, he warmed lumps of old candle wax until it was soft enough to shape into a copy of the key.

With his wax copy safely in hand, de Valera had to find a way of sending word to his fellow revolutionaries for assistance. However, since all forms of communication between prisoners and freemen were heavily monitored, this would require more stealth and cunning. De Valera enlisted the help of fellow prisoner Sean Milroy whose artistic skills were bound to fool the guards. Milroy drew a postcard depicting a small man attempting to fit a comically large key into a door. Turns out, this comically large key was an outline of the wax replica de Valera had made. They addressed the postcard to his co-conspirators, Collins and Murphy, and waited. 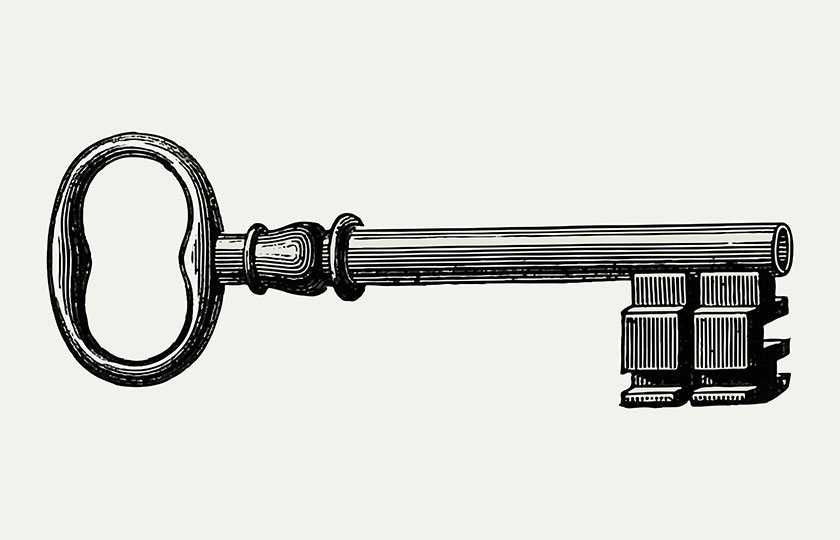 A Suspicious Number of Fruitcakes Later

A little while later, Murphy delivered a cake to the prison in which they had concealed a replica key. Suspicious of the cake’s potential contents, the warden used a thin knife to poke holes all around the cake’s surface. When the warden did not feel the tip of the blade pierce any concealed items, he deemed it suitable to deliver to de Valera. Unfortunately, the whittled key was too small. De Valera realized the original wax key had most likely shrunk over time as the wax dried out.

Once again Milroy’s artistry was utilized to conceal a second key impression in the center of an ornate Celtic pattern. And once again, Murphy delivered his second cake to the prison. After anxiously watching as the cake underwent the warden’s same invasive inspection process the cake was deemed acceptable and delivered to de Valera. But alas, the second attempt also did not work.

Fearful the continuous stream of cake deliveries was causing suspicion, Murphy decided for one more escape attempt. He decided to conceal a blank key and a complete set of files inside a third and final cake. However, a regular cake would not successfully conceal such hardware. So instead, Murphy baked an oblong fruitcake whose dense texture might help hide the tools and fool the warden. Turns out, Murphy was right! After being poked and prodded, the third cake was delivered to de Valera. Excising the key and files, de Valera enlisted fellow inmate Peter DeLoughry, who fashioned a key capable of unlocking the jail cell. Finally on February 3, 1919, after weeks of hard work, de Valera used his newly fashioned key to make his escape. 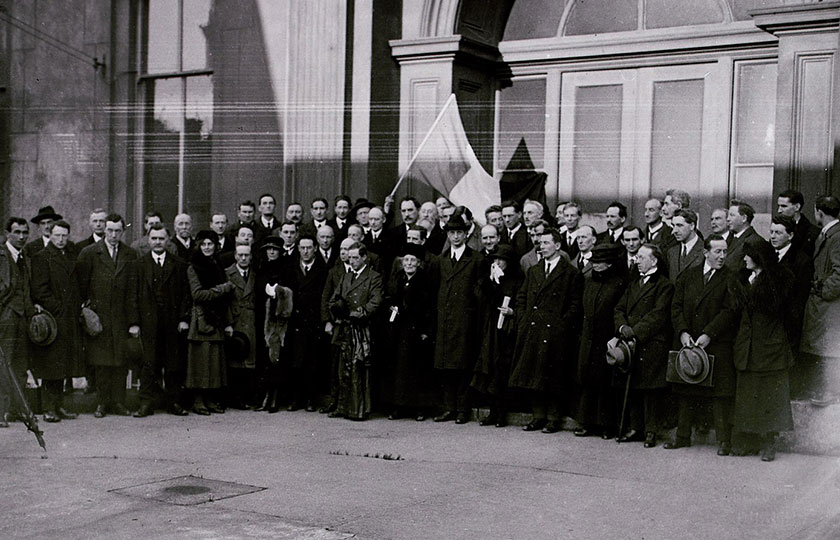 During his incarceration, de Valera’s political party, the Sinn Féin party, had won the majority of seats in the 1918 general election signifying British rule of Ireland was abolished. In January of 1919, members of the Sinn Féin party assembled to form an Irish parliament known as the Dáil Éireann. Upon de Valera’s escape from prison a month later, the newly established parliament decided to elect him President of Ireland. Had he not escaped using a fruitcake as his key to freedom, de Valera would not have had this opportunity. 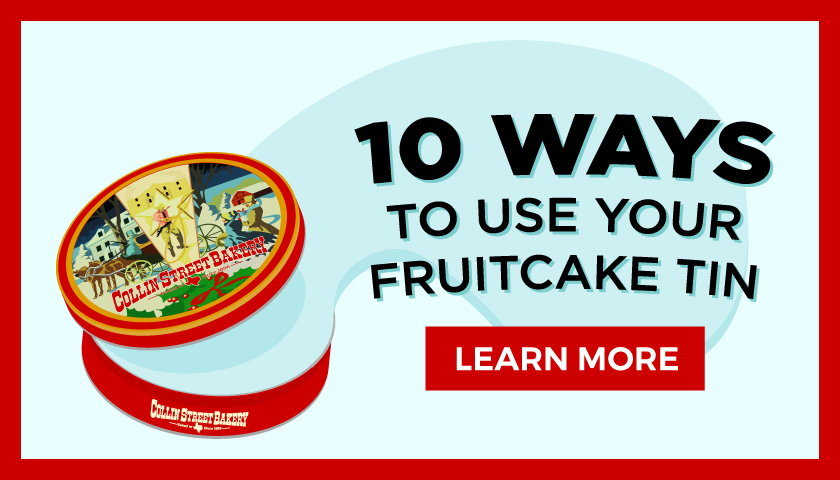 If You Liked This Story, Then You'll Love This...

Think Éamon de Valera was creative for using a fruitcake to help him successfully escape prison? Sounds like you're a person who enjoys ingenuity and out-of-the-box thinking. You should definitely read our blog, 10 Ways to Reuse Your Fruitcake Tin. Here you’ll find some of the best tips, tricks, and life hacks for how to use your leftover DeLuxe® Fruitcake tins, courtesy of some of our most loyal Collin Street Bakery customers.

LEARN HOW TO USE YOUR LEFTOVER TIN