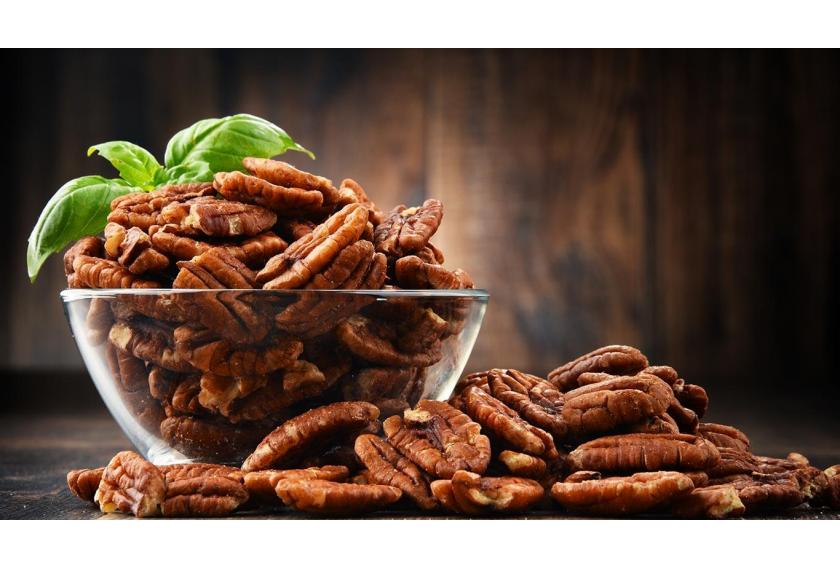 Here at the Bakery, we are nuts about pecans. We use A LOT of them in our delicious cakes and desserts so they’ve sorta become our thing. That’s why April 14th is kind of a big day at the bakery; it’s National Pecan Day!! So to celebrate we thought we’d share a little of our pecan knowledge. Let’s get cracking!

What Is A Pecan?

Pecans are smooth, brown, oblong nuts containing edible kernels sometimes referred to as ‘meat.’ While somewhat similar to walnuts in composition, a pecan’s main difference can be found in its taste; while walnuts have a trademarked bitterness, pecans taste buttery and earthy, making them quite popular for use in the culinary arts.

Pecans are the only nut tree indigenous to North America. In fact, the word “pecan” is derived from the Native American word “pacane,” meaning ‘a nut requiring a stone to crack.’ Having originated from the river valleys of Mexico in the mid-16th century, pecans were quite popular with pre-colonial residents. Used not only as a food staple but also as a type of currency in trade, pecans were considered to be supremely valuable.

Over time, as European settlers began to inhabit the new world and the popularity of pecans began to spread, so did the proliferation of the trees themselves. Pecans became a common tree found not only in naturally occurring groves but also systematically planted orchards. Soon pecan nuts were planted in regions we today identify as Arkansas, Arizona, California, Florida, Georgia, Louisiana, Oklahoma, and Texas.  Eventually, the widespread demand for pecans led to the commercialization of the nut as a food staple.✝

Pecans are extremely versatile. Tender enough to eat right out of the shell yet hardy enough to withstand heat, pecans are not only dynamic but unexpectedly flavorful. Their buttery and rich taste is only enhanced by the proverbial cornucopia of nutritional benefits.

Unlike most health food, pecans disguise their nutritional value with their supreme taste. Whether raw, roasted, candied, or ground, pecans bring their own unique taste and texture to the table which is why you often find them included in dishes such as desserts, salads, and sides.

In addition to being the main ingredient in our most popular product, our DeLuxe® Fruitcakes, Collin Street Bakery incorporates pecans into 25 different desserts including 8 unique cakes, 2 pies, 3 pastries, our most popular type of bread, and a whopping 11 cookie flavors!

Not all pecans are created equal.  Pecans vary in shape, size, texture, and flavor. With over 500 varieties of pecans, this is to be expected. However, regardless of variety, all pecans can be grouped into one of two primary categories: natively grown pecans and pecans grown from grafted trees.

A native pecan is a pecan grown from a tree which was planted directly from a pecan nut itself. Sometimes referred to as “nature’s nut” or “seedlings,” native pecans embody the natural growth cycle of a tree from seed, to sapling, to tree, and finally back to seed.  Pecans which have not been specifically designated as ‘native’ have more than likely been grafted, or combined, with another species of tree. Essentially, a grafted tree is any type which has had the fruiting branches of one species inserted into the stock of another species. This allows growers to combine the best structural features of one tree with the fruiting capabilities of another.^

Tree grafting is extremely valuable in geographic areas where growing natively is impossible due to weather, soil conditions, or the tree’s natural frailty. However, the convenience of tree grafting sometimes compromises the flavor of the resulting fruit. Pecans grown from grafted tree tend to have weaker shells, be larger in size, and weaker in flavor. In comparison, natively grown pecans tend to have thicker shells, be smaller in size, and sweeter in flavor.

At Collin Street Bakery, it is our mission to use only the best ingredients nature can nurture. That’s why we only use natively grown Texas pecans in all our baked goods. We prefer the richer, nuttier flavors of native pecans so we thought our customers would too!

Located just two short miles away from our Collin Street Bakery headquarters lies the Navarro Pecan Company; a 200,000 sq. ft. facility specializing in the shelling of over 50 million pounds of pecans every year. Having been in business for over forty-two years, it’s safe to say that the good folks at the Navarro Pecan Company are certified pecan experts. Thanks to this local business, we here at the Bakery have been able to fulfill the yearly demand for our cakes, pies, and cookies.

Thank you Navarro Pecan Company! We couldn’t do it without you.

The best way to celebrate National Pecan Day, is, of course, by snacking on some delicious pecans and pecan-inclusive goodies. Let us help you celebrate!

Pecans make up 27% of our most popular product, the DeLuxe® Fruitcake.