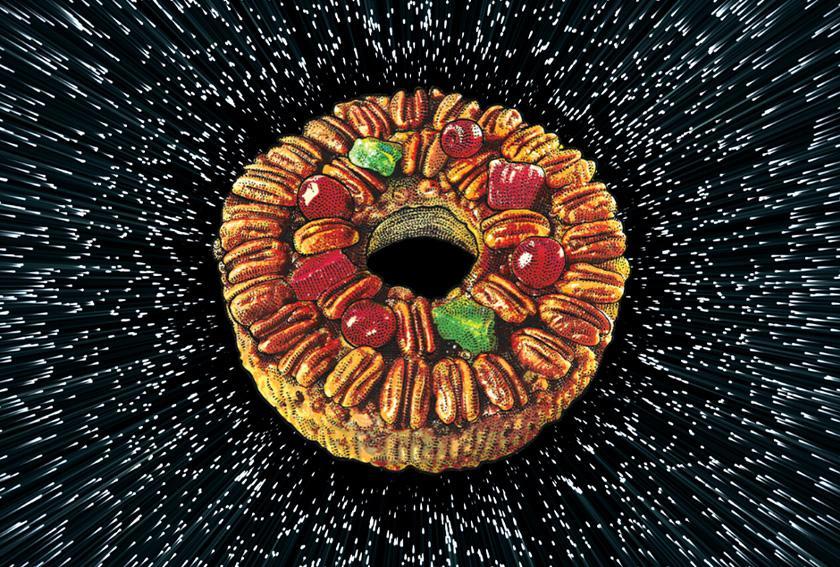 How Fruitcake Accompanied Astronauts in Space

Thanks to the “science fiction” genre, society isn’t short on movies about outer space. From Apollo 13 to Interstellar, Hollywood has done everything in its power to bring our universe to a theater near you. Certainly, you have seen one or two of these flicks. Each of these movies has its own take on astronaut life . . . what they eat, when they sleep, and how they move. Now, what if we told you that fruitcake played a role in space exploration. And not in the movie version! But in real life.

You see, when astronauts go into outer space, how they eat in a zero-gravity environment changes significantly compared to how they eat on Earth. Astronaut meals are typically packaged in shiny, shrink-wrapped sleeves hardly resembling the food labeled on the outside of the package. Calories, crumbs, and food longevity are all determining factors for what should go into space and what should stay on earth.

One of the food staples sent in early space missions was fruitcake. Fruitcake was shelf-stable and did not require refrigeration or cooking before consumption. Nowadays, as we look towards sustaining life in space, more research is done to see how food can be grown in zero gravity environments. But we could not have gotten to where we are today if we hadn’t started somewhere and fruitcake helped us in that journey. 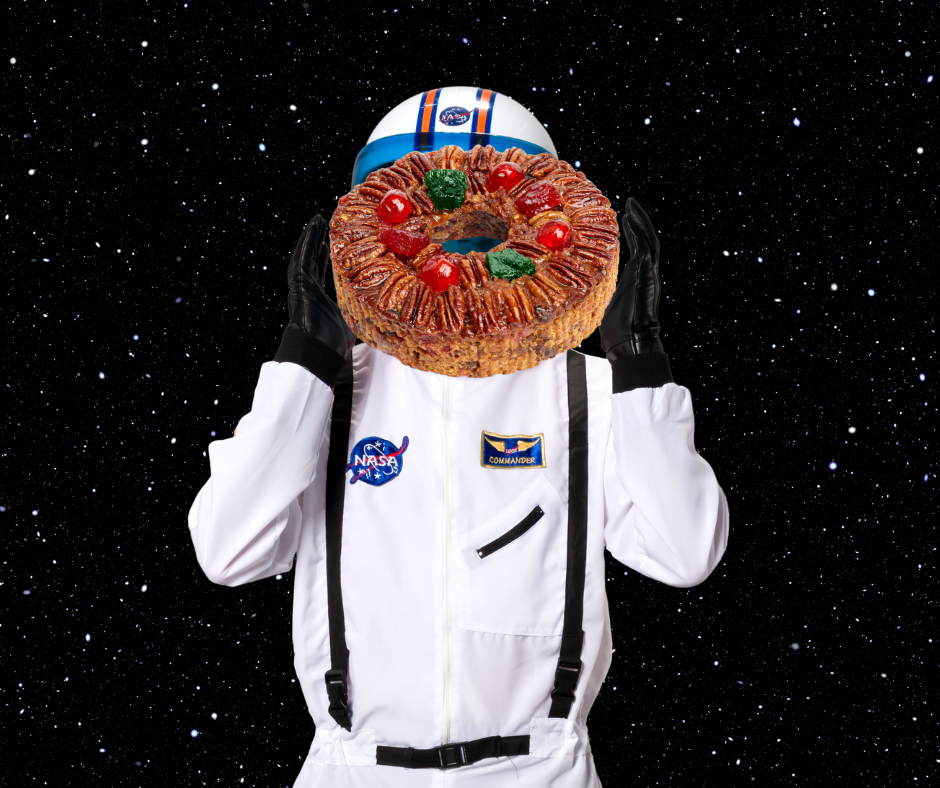 You read that right. According to The Annals of Improbable Research, “During the 1970s and 1980s, the U.S. military conducted a series of tests on fruitcake.” The tests were issued to find out if fruitcake was a viable source of nutrition that astronauts could store in space for an extended period of time. When/if other “space food” items ran out, they needed a source of nutrition that could supply them over the long haul. And in 1968, fruitcake met the Required Daily Amounts – “700 grams supplying 2800 calories, 65 grams protein, nine vitamins, and at least four minerals.” – to fuel their lunar fire.

Once the NASA tests were proven, fruitcake boarded the shuttle and bid the earth goodbye! Our favorite dessert accompanied Apollo 17 on the United States’ latest mission to the moon. Far out! In addition, fruitcake was on the Apollo-Soyuz flight which was the first U.S.–Soviet joint lunar mission. And the delicious menu item even found itself inside Skylab which was the first space station manned by the United States.

“When we started the Skylab Program we had to make a lot of guesses about the best way to operate in space. Everything from how to plan the day, to how to have the crew exercise, to how to operate instruments on a human-occupied spacecraft. We owe so much to the pioneering crews, the operations teams on the ground, and the scientists that paved the way. Skylab helped us define the problems for long-duration spaceflight, and now the International Space Station is solving them one by one.” 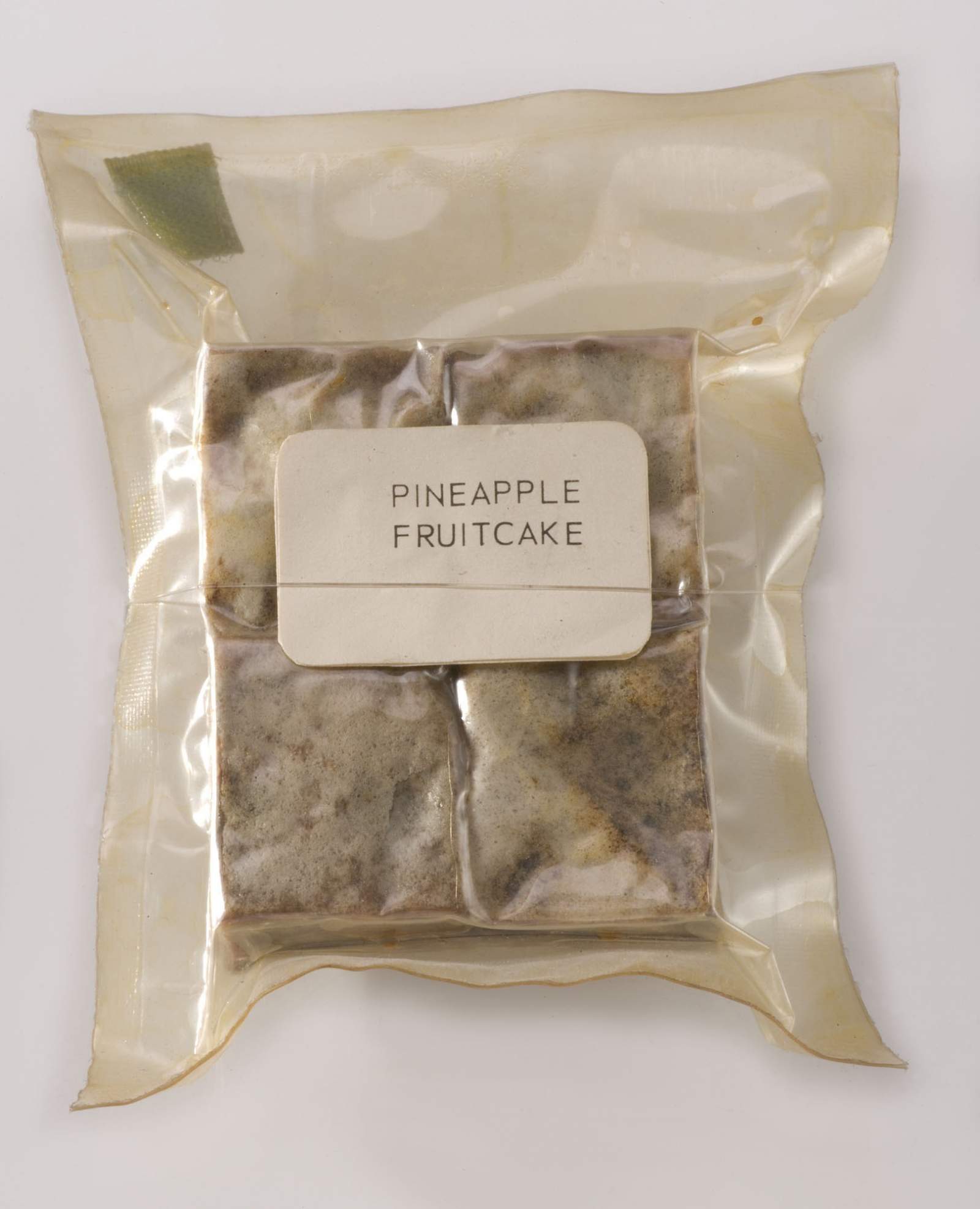 Although the fruitcake recipe sent to space was not our original Collin Street recipe, we think NASA and U.S. Army Natick Laboratories did a pretty good job with their own take on the delicacy. You can view their recipe here. However . . . that recipe was created in the 1960s. We think that’s a little late to the game. If you want a recipe that has filled hearts since the 1800s, look no further than our present-day perfection: the Collin Street DeLuxe® Fruitcake.

Fruitcake helped lay the groundwork for NASA and our astronauts today. Although fruitcake isn’t a current moon-mission mainstay, it sure paved the way (and fed our astronauts!) while they orbited this giant rock we call home. It’s one more way fruitcake has provided sustenance to fuel society in a pinch. Power bars, energy drinks, and gels have come and gone, but fruitcake persists as a nutritional powerhouse for anyone needing a boost. Whether that boost is to the moon or during your daily work-out routine . . . we promise our favorite snack will get the job done.

Now that you know how outer world-y fruitcake can be, have we convinced you to try a slice for yourself? Made with really good stuff baked right inside, we guarantee you'll love it or we'll make it right. So, rocket on over to our DeLuxe® Fruitcake page to try this interstellar treat for yourself.