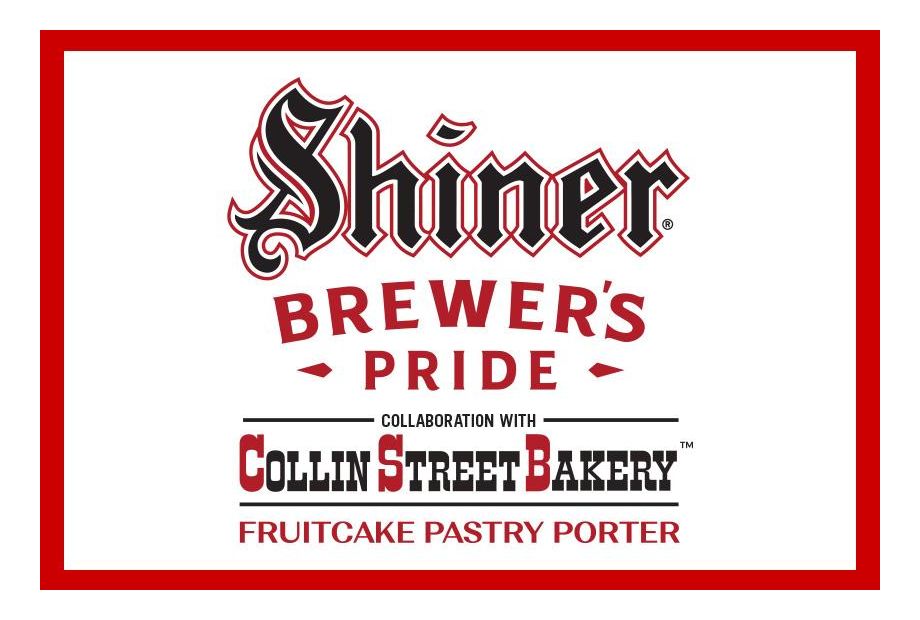 We’ve been holding onto a BIG secret. It’s been incredibly difficult to keep it quiet, but luckily, it’s time to break our vow of silence. Shiner Beer and Collin Street Bakery have collaborated to create the first-ever Fruitcake Pastry Porter—a limited edition beer from Shiner’s Brewer’s Pride series! Released just in time for the holidays, our Fruitcake Pastry Porter is inspired by none other than our award-winning, world-famous, record-holding DeLuxe® Fruitcake.

Now, we know you probably have lots of questions like, “How did this collaboration come to be?”, “What does the Fruitcake Pastry Porter taste like?”, and “Where can I find it?”. Not to worry! We’ve got answers to all your questions. Keep reading to get the details!

Just like Collin Street, Shiner is a Texas-based business located in a teeny-tiny town. Second, both Shiner and Collin Street are over 100-years old. Lastly, just like our bakery, Shiner’s founder was a German immigrant turned entrepreneur. We mean, geez Louise! After learning all this, what’s really the most stunning is how we didn’t create a collaboration sooner.

Shiner was founded in 1909 in the quaint little town of Shiner, Texas. With a population of only 2,069, the townspeople are intimately connected and completely committed to the success of the brewery. Now-retired Shiner city secretary Norma Goetz explains, “We tell relatives who don’t live in Shiner that our houses have three faucets. One for hot water, one for cold, and one that delivers that wonderful Shiner Beer.” Sounds a little like the relationship Corsicana residents have with Collin Street Bakery.

Just like Collin Street Bakery’s founder, Shiner’s founder, Kosmos Spoetzl, settled in Texas after having extensively traveled the world perfecting his craft. Once established, Kosmos purchased the area’s only brewery, the Shiner Brewing Association, and quickly renamed it the Spoetzl Brewery. The newly named brewery began producing a Bavarian-style craft beer created by following a secret Spoetzl family recipe. The beer, made with pure malt and hops, was an instant regional hit, as many local residents were themselves German and Czech immigrants.

To market his new brew, Kosmos took a grassroots advertising tactic quite similar to that of Collin Street’s co-owner, Thomas McElwee. Kosmos loaded his Model-T car with kegs and ice and drove all about the Texas countryside offering free refreshments to hot, thirsty cotton farmers. Kosmos’ generosity and personal investment in the townspeople of Shiner endeared the Spoetzl Brewery to the local community. This endearment blossomed and grew over the next forty years into a booming local business.

Upon Kosmos’ passing in 1950, his business was left in the capable hands of his Brewmaster daughter, Cecile. Sixteen years later, in 1966, she retired and the business changed hands once again. Today, the Spoetzl Brewery’s state-of-the-art Brew House is owned by the Gambrinus Company, a family-owned and operated business based in San Antonio, Texas.

While the shift in ownership did help boost Shiner’s national recognition, not much changed on the operations side. Every single drop of Shiner beer is still crafted in Shiner, Texas. In fact, in March of 2021, the Brewer’s Association, a not-for-profit trade association dedicated to promoting and protecting small and independent American breweries, released its 2020 rankings for craft brewing companies in the United States. A Gambrinus’ main beer brand, Shiner ranked fifth out of fifty. Not too shabby, Shiner. 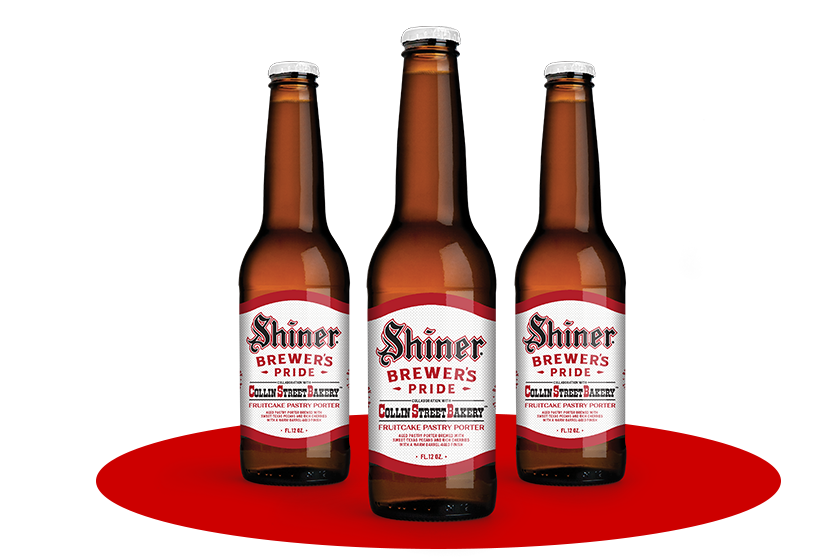 Arguably, Shiner’s most famous beer is Shiner Bock. Still made following the original Spoetzl family recipe and as delicious today as it was in 1909, Shiner’s brewers decided there’s no need to tinker with perfection. As Spoetzl Quality Control Manager, Peter Takacs puts it, “Most breweries change recipes to fit their equipment. Here, we changed equipment to fit the recipes.” However, instilled in every Shiner’s Brewmaster is an independent attitude and love for making unique, highly drinkable beers. That’s how the Brewer’s Pride series came to be.

Shiner’s Brewer’s Pride beers are a rotating lineup of unique, limited-batch beers crafted to highlight the skills of Shiner’s brewers. Made by drawing inspiration from local flavors, beloved brands, and seasonal ingredients, Brewer’s Pride combines craftsmanship with creativity to create something truly special. Of course, when it came to finding inspiration for this upcoming season’s holiday brew, Shiner’s Brewmasters didn’t need to look much further than Corsicana, home to world-famous DeLuxe® Fruitcake. Cue Shiner and Collin Street Bakery’s beer collaboration! 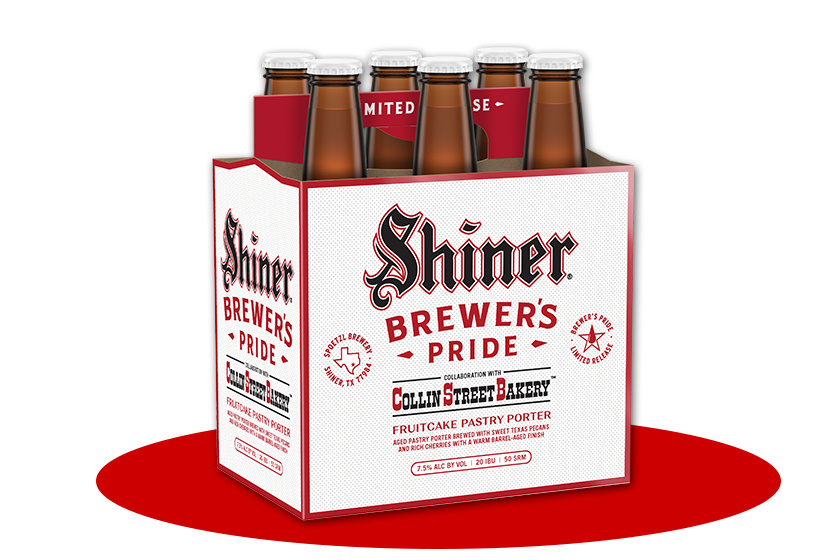 That’s because our DeLuxe® has been a holiday must-have for over 125 years. Made using only the finest ingredients, our fruitcakes have become the cornerstone of countless family traditions for generations. So, it was only natural when it came time to decide on a Christmas beer collaborator, Shiner knew to call Collin Street. But, we aren’t embarrassed to admit, the initial request knocked our Christmas socks off!

“Shiner reached out to us and said, ‘Hey, we'd like to do a fun co-branding venture with the Collin Street Bakery,” recalled Thomas McNutt, Executive Vice President at Collin Street Bakery. “And I responded by saying, ‘Are you sure you've got the right number?’ I was so flattered that they’d think of us.”

Not long after that initial call, the collaboration was finalized. But now, there was another question --what should the beer taste like?

“Initially, Shiner suggested the idea of a pairing beer—a beer that would pair nicely with fruitcake,’ said Thomas McNutt. “But then, our Chief Marketing Officier, James Manning, said ‘Hey, why don’t we make a beer that resembles our fruitcake.’ That idea stuck.”

Chris Woosley, Shipping Manager at Collin Street Bakery, continued the thought, “We ended up taking some of our cakes to Shiner, so we could visit with the brewers and talk about different types of potential flavors. Ultimately, we decided on a pretty stout beer, full of rich flavors.”

After the vision was established, it was time to get about the business of brewing beer! In Shiner’s unofficial product release, they described the flavor of the first-ever Deluxe® Fruitcake-inspired beer:

Mmmmm, sounds pretty tasty, right? After reading that description, we bet it’s a tie between what you want most, a slice of fruitcake or a bottle of beer. Luckily for you, there’s no need to decide. Enjoy both! Follow the below instructions to locate a bottle of our Fruitcake Pastry Porter and click here to shop our selection of DeLuxe® Fruitcakes.

As we mentioned, Collin Street and Shiner have much in common. One of those commonalities is our unique ability to boast our business’s longevity. Both Shiner and Collin Street are over 100-years old. In fact, this year, our bakery celebrates its 125th-anniversary. Happy birthday to us!

One of the most beautiful things about turning 125, is our ability to reflect on our growth. Since 1896, our bakery has experienced ups and downs. We’ve grown, evolved, modernized, and even simplified. We wonder sometimes what our founder Augustus “Gus” Weidmann would think about the business he began all those years ago still being around. We wonder what he’d think about his cakes becoming so famous, they turned it into a beer!

“When you get focused on all the work things, and it's sometimes crazy to realize just how well-known we are,” said Thomas McNutt. “You're just working, and you don't quite have a good perspective. But, [our business] is a big part of family stories… like the employees and customers of Shiner. It's just neat to be reminded through collaborations like this.”

But, our Shiner Beer collaboration hasn’t been the only momentous event in this landmark year. This past year, Collin Street Bakery expanded our partnership with the GO TEXAN organization, enabling us to participate as the official 2021 State Fair of Texas GO TEXAN Social Media Sponsor. We also launched our first-even Gluten-Free Fruitcake and revamped our vintage-style DeLuxe® Fruitcake Ornament.

In short, it’s been a whirlwind year, and it’s still not over yet. As the holidays approach, the seasons of fruitcakes, we’re only ramping up!

So, here’s to our DeLuxe®—cheers to fruitcake beer! Keep in mind, Shiner’s Brewer’s Pride beers are available in LIMITED QUANTITIES for a LIMITED TIME. So, don’t wait! Find a location near you today. Be certain to loop back to tell us your thoughts in the comments below.

*The content created on this site is meant to entertain and educate responsible adults of the legal drinking age. Content on this page does not support underage drinking, excessive drinking, binge drinking, or any other unsafe drinking behavior. Always drink responsibly. DO NOT drink and drive while using this product. Collin Street Bakery is not responsible or liable for any actions taken in the obtaining, delivery, or consumption of this product.

**GOVERNMENT WARNING: (1) According to the Surgeon General, women should not drink alcoholic beverages during pregnancy because of the risk of birth defects. (2) Consumption of alcoholic beverages impairs your ability to drive a car or operate machinery and may cause health problems.