When most of us think “pecans,” we think of dessert. Whether baked into a pie, sprinkled on a sundae, or hand-placed atop our world-famous DeLuxe® Fruitcake, it’s easy to associate pecans with sugary treats. Rich and buttery, with a naturally sweet flavor, pecans are the perfect accompaniment to any after-dinner indulgence. But, these little nuts have much more to offer than just the perfect crunch for our Pecan Cakes.

Packed full of healthy fat, protein, and fiber, pecans are nutrient-dense super nuts. But, that’s not all! We've only just cracked the surface of everything this little nut has to offer. Join us in taking a deeper look at pecans, where they come from, and their nutritional breakdown—all while discovering new ways to enjoy them.

The Evolutionary Origins of Pecans 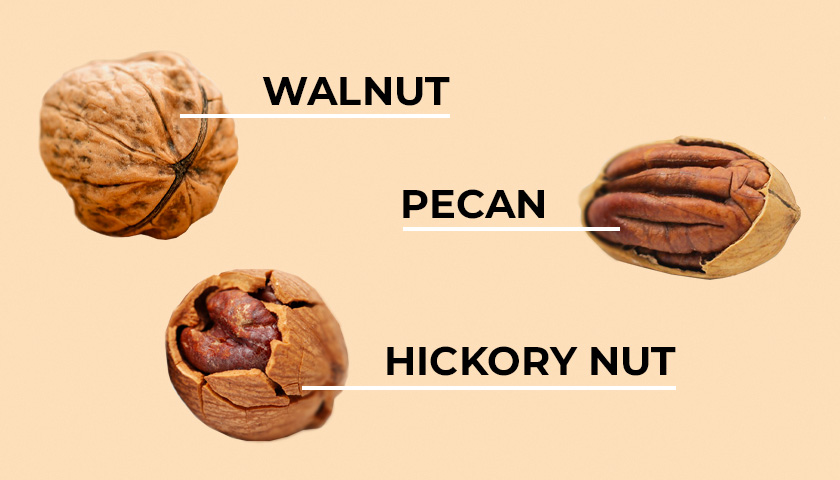 If you recall from biology class, all life is organized based on descending ranks of hierarchy—life, domain, kingdom, phylum, class, order, family, genus, and species. In this case, pecan trees are the lowest classification of species in a long line of plant parentage, starting with walnuts. While the evolutionary progression might be difficult to grasp, this connection makes sense when comparing the physical attributes of these three nuts. Rather similar in shape, size, and structure, walnuts, hickory nuts, and pecans are often confused.

Each is characterized by a hard, thick outer shell with a partitioned inner nutshell. The flavor profile of each nut is also quite similar—soft and buttery, with a slightly sweet taste—making each rather popular in everyday baking and cooking. 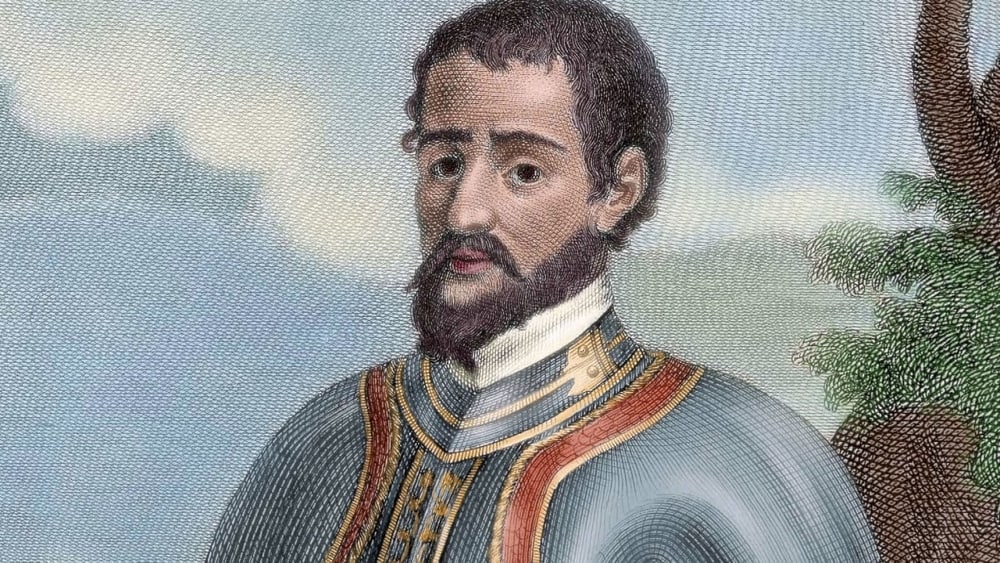 The Discovery of Pecans

Like many early discoveries, the documented discovery of pecans has a somewhat questionable authenticity. Many history books will ascribe credit to a Spanish conquistador by the name of Hernando de Soto. In 1538, de Soto embarked on a mission to conquer what is now Flordia and its surrounding regions for the Spanish crown. While traveling nearly 4,000 miles throughout the region that would later become the southeastern United States, de Soto happened upon the region we now call Arkansas. It was in this region de Soto and his men “discovered” pecans, which they called “nuez de la arruga,” which roughly translates to "wrinkle nut.” Amazed by their taste, de Soto’s men took to cultivating pecan trees as they pressed through the North American interior. By 1711, Spanish colonists were prolifically growing pecans throughout the American Southwest.

However, not all bestow credit on the adventurous Spaniard. Prior to de Soto’s quest, indigenous North American tribes had been cultivating the growth of pecans as a primary source of food. Harvested, cracked, and then pounded into a fine powder, pecans were combined with water to add flavor to broths and boiled vegetables. In fact, the origins of the name “pecan” can be traced back to the Algonquin people—a North American Indian tribe with close cultural and linguistic relations to the Odawa, Potawatomi, and Mississauga tribes. Originally, pecans were called “paccan” or “a nut requiring a stone to crack.” Later,  French settlers changed the name the “pacanes.” The name’s origins provide ample credence that Native Americans, not de Soto, should be credited with the pecan’s discovery.

The pecan is the only major nut treat grown indigenously in North America with roughly fifteen states as production leaders. These states include Alabama, Arkansas, Arizona, California, Florida, Georgia, Kansas, Louisiana, Missouri, Mississippi, North Carolina, New Mexico, Oklahoma, South Carolina, and Texas. Because pecans are primarily only grown in the United States, they are considered one of the most valuable nut species in the region, with North America producing 80-95% of the entire world’s supply. 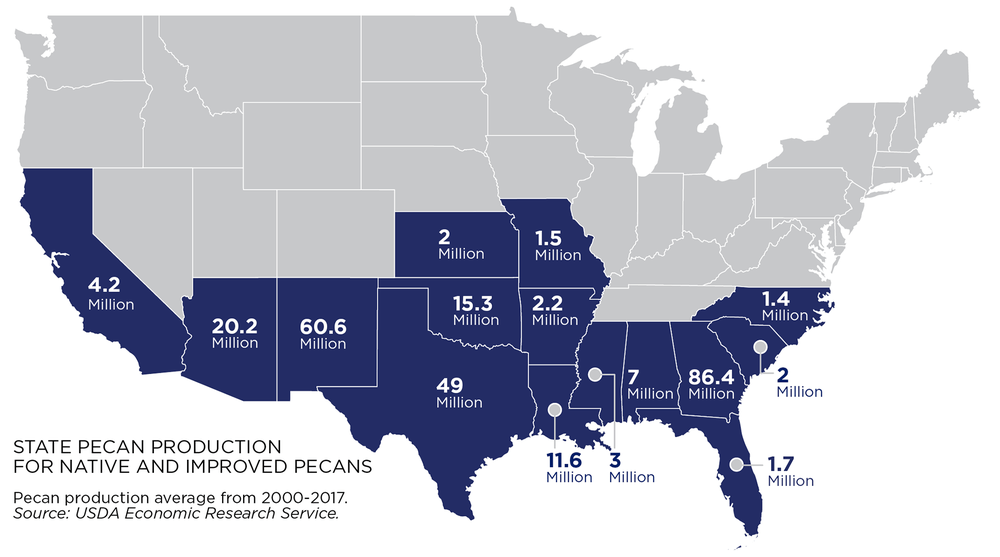 While there are more than five hundred different types of pecans, the majority of pecans grown are limited to a dozen or so varieties. These include Western, Desirable, Stuart, Burkett, Wichita, and native pecans. As a homage to pecan indigenous origins, many other varieties are named after Native American tribes such as Cheyenne, Sioux, Apache, Osage, Pawnee, Mohawk, Kiowa, and Choctaw.

Despite these distinctions between varieties, it’s uncommon to find the variety name listed on a package of pecans. Instead, you’ll find labels referencing the nut’s size and color—distinctions that provide more comparison between varieties than the varieties’ names. Descriptors like “golden brown” or “amber” are typically used when describing the color, while “mammoth” and “small topper” describe the size.

What is Pecan Tree Grafting?

One of the reasons why the variety of pecans is less important than a pecan’s color or size is because pecans grown from seeds are not always true to type. Meaning, a pecan produced by one variety of tree will not always produce a tree identical to that of its parent. Seems pretty odd, but it’s true.

Unlike other types of plants, every new pecan tree grown from a nut planted in the ground produces pecans that are slightly different than the tree from which it originated. This means, varieties of pecans have a spectrum of normalcy and are subject to significant variations. However, pecan growers have found a way to express some level of control over this natural phenomenon through a process called “grafting.”

Grafting is a horticultural technique that joins two plants so that they appear to grow as a single plant. In grafting, the upper part, or “scion” of one plant is attached to the root system, or “rootstock” of another plant. Because they are clonally produced, trees grown by grafting will produce nuts that are identical to the source of the grafted wood. This process enables pecan tree growers to proliferate one type of pecan nut variety without having to natively plant new pecan trees.

Since the majority of pecans grown are native to the American Southwest, it only makes sense that the world’s largest pecan sheller would be located in Texas. Positioned in the same county as Collin Street Bakery, the Navarro Pecan Company is located in Corsicana, Texas.

Navarro Pecan’s 200,000 square-foot, state-of-the-art facility operates on a 24-hour basis and processes more than 50 million pounds of pecans annually. With the capacity to refrigerate more than 20 million pounds of pecans at any point in time, Navarro Pecan is able to maintain peak pecan freshness all year round—a fairly convenient feature for our bakery, since our primary product, our DeLuxe® Fruitcake, contains 27% pecans by volume.

When it comes to pursuing a healthy lifestyle, there are four components to keep in mind—sleep, stress management, exercise, and nutrition. Typically, the area in which most people struggle to maintain a healthy balance is nutrition. This is primarily because of a lack of education. Take, for example, the consumption of fat. Fat has become a pejorative term for anything perceived to be unhealthy. However, certain kinds of fats are necessary components of a healthy diet. The tricky task is to distinguish between good fats and bad fats.

Take, for example, unsaturated fats. Liquid at room temperature, these kinds of fats are considered beneficial to our health and wellness. Predominantly found in foods such as vegetable oils, nuts, and seeds, unsaturated fats have been proven to improve cholesterol levels, reduce inflammation, and stabilize heart rhythms. There are two primary categories of “good” unsaturated fats. These are monounsaturated and polyunsaturated fats. 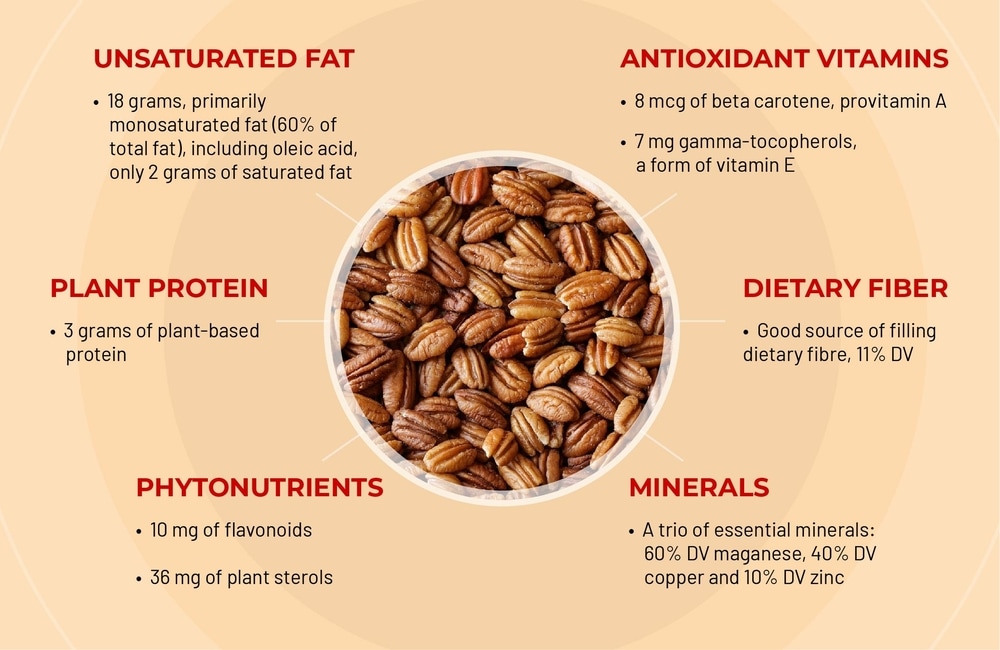 A complex combination of proteins, unsaturated fat, dietary fiber, antioxidant vitamins, and phytonutrients, every handful of pecans is a nutritional powerhouse of good, clean energy. Furthermore, according to studies conducted by the U.S. Food and Drug Administration, “Scientific research suggests but does not prove that eating 1.5 ounces per day of most nuts, such as pecans, as a part of a diet low in saturated fat and cholesterol, may reduce the risk of heart disease.*”

*One serving of pecans (28g) contains 18g of unsaturated fat and only 2g of saturated fat.

The Best Ways to Enjoy Pecans

Like most other nut varieties, pecans can be bought in a handful of different forms—shelled, unshelled, halves, pieces, raw, roasted, salted, and unsalted—the list could go over forever! Outstandingly versatile, pecans, in some form or another, can substitute for just about any ingredient. 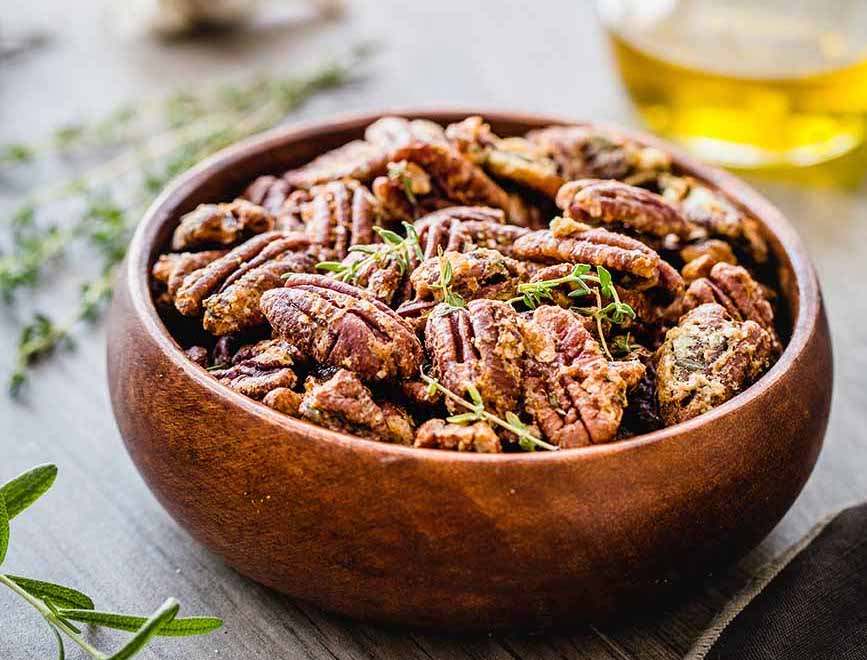 All this talk of pecans is making us hungry. Luckily for you, we have a crackin’ good recipe for you to try. Turn pecans from a naturally-sweet snack into a salty and savory herb creation with this simple, three-step recipe from the American Pecan Council:

1 to 2 tbsp fresh chopped herbs such as rosemary, thyme, chives, or dill

Preheat your oven to 300-degrees. Line a baking sheet with parchment paper and set it aside.

In a large bowl, beat the egg with a fork until frothy. Add pecans and stir until coated. In a small bowl, whisk together olive oil, garlic powder, herbs, and salt. Pour mixture over pecans and stir to coat evenly. Spread pecans in an even layer on the prepared baking sheet.

Bake pecans for 40 minutes, stirring halfway through. Allow pecans to cool completely. Store in an airtight container for up to four days. Makes 2 cups. 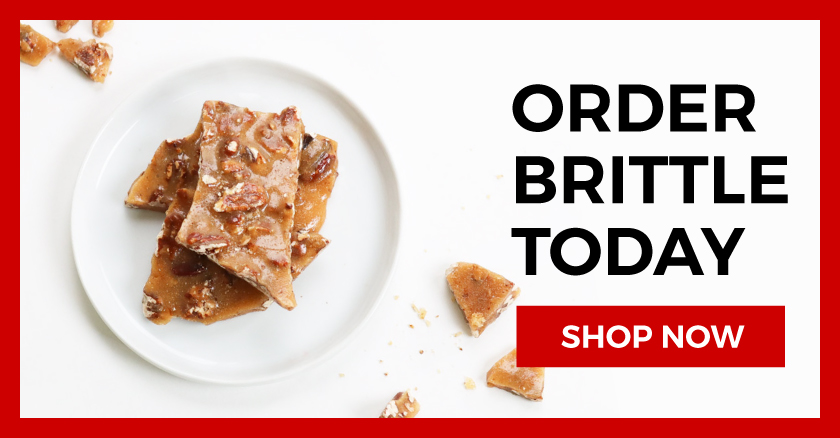 Our Pecan Brittle is the crunchy, sweet treat you never knew you needed. Made the old-fashioned way, cooked inside a copper kettle, and cooled on a marble tabletop, our brittle is a homestyle delicacy. Buttery and nutty, one bite of our brittle will have you hooked.