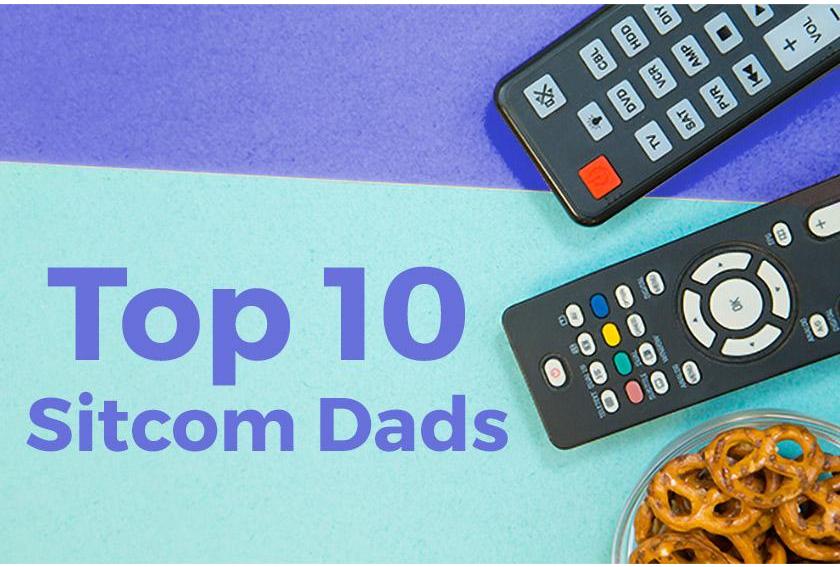 Most Iconic TV Dads of All Time

With Father’s Day just around the corner, we decided to celebrate by taking a look at some of the most iconic dads in television history. Being a father can be a complicated job. Even if they only parent for about thirty minutes a day, and that’s including commercials! But all jokes aside, being a dad requires a sharp wit, expert timing, and hilarious facial expressions. That’s why all these lucky men have made our list of TV’s most iconic dads of all time.

He loves sports, tools, and cars. He inspired many a young man’s passion for woodworking with his show Tool Time. We’re of course talking about none other than Tim Taylor. Now, Tim’s not just the ultimate man’s man, he’s the ultimate boy-dad. With three sons who love to prank and tussle, Tim’s got his hands full. But not to worry. There’s always his neighbor Wilson to set him straight. While he’s constantly hidden by the backyard fence, Wilson’s sage advice is unobscured.

FUN FACT: Tim Allen was such a popular dad character, he currently stars in a second sitcom, Last Man Standing, where he’s the father to three young girls. A subtle nod to Tim’s run on Home Improvement.

Andre and his wife Bow are a successful African-American couple, raising their five (yes, FIVE!) children in a predominantly white suburb. In a bit of traditional gender role reversal, Bow takes the role of primary breadwinner, while Dre stays home. Dre’s daily struggles include ensuring his children retain a sense of that culture about their own black heritage while attempting to balance his own parent’s ideas of how his children should be raised.

His parents live just across the street, his brother is constantly dropping by, and he fruitlessly offices out of the basement. We’re talking about Ray Barone. For some reason, his wife agreed to the whole neighboring inlaws thing and it’s caused Ray to regress to something of a man-child. However, these stories aren’t just some writer’s comical musings. They are direct inspirations pulled from the real Ray’s actual life. Knowing that puts the show into a whole new humorous light.

He’s strict, a little cheap, and at times, has a bit of a temper. He’s not just judging you at work, but at home too. He’s, of course, Uncle Phil. While he comes across as something like a rough diamond, he’s really kind, loving, and welcoming to his trouble-prone nephew, Will. But with four kids in the house, he’s really got his hands full. However, Uncle Phil is pretty good at rolling with the punches, so on the list, he goes!

He’s a singer and he’s always trying to keep up with his aspiring entertainer wife, Lucy. Everyone knows him as Ricky Ricardo but in real life, he goes by Desi Arnaz. We’re, of course, talking about the very popular 50’s sitcom, I Love Lucy. The show's widely-watched popularity was due to the genuine love and friction between the show's two main characters, Ricky and Lucy, who were actually married in real life. In fact, the main theme of season two is the expected arrival of Ricky and Lucy’s first child. This storyline was created to mirror the anticipated arrival of Desi and Lucille’s actual first child. The rest of the shows’ seasons depict how Ricky navigates his son’s mischief, his Cuban heritage, and his natural talent for playing drums.

FUN FACT: The prerecorded episode where Ricky Ricardo Jr., aka Little Ricky, was born aired on the real birthday day of Desi and Lucille’s actual child.

This dad couldn't be any more different from his two sons. He drinks beer, and they drink sherry. He munches on pork rinds, and they nibble on caviar. He relies on homespun wisdom, and they spout medical diagnosis from the DSM. We’re talking about Martin Crane and his two sons, Frasier and Niles from the popular 90’s sitcom, Frasier. The clear juxtaposition of on-screen personalities ignites the shows’ exceptionally dry humor into a crackling fire of comedy. And while Frasier and Niles are the psychiatrists, it's’ really Martin who teaches his sons the most valuable lessons about life, love, and family.

There’s no lack of dads on Arrested Development. Between George, Oscar, Gob, and Tobias, there’s plenty of patriarchal figures. However, none of these men would win a ‘Father of the Year’ award. The show’s one exception is Michael Bluth. While it’s easy to shine in comparison to the other unreliable cast of characters, Michael consistently attempts to set an example of stability, consistency, and hard work for his one and only son George Micheal.

He yells. He has red hair. He wears sneakers in the swimming pool. His name is Frank Constanza. Even though he only appears in twenty-nine of the 180 episodes of Seinfield, Frank is hands down, one of the most memorable father figures in television history. It’s Frank who gave us Festivus --the holiday for the rest of us, “serenity now!”, and the Mansier --a brasier for men. And when it comes to being a dad, he’s “One in a million, Doc. One in a million.”

He’s not good with money, he thinks it’s called Tweeters, and his eyebrows are more than iconic. We’re talking about Johnny Rose from Schitt's Creek. As patriarchal male figures go, we’re not quite certain he’s wearing the pants in the family. Between his linguistically comical wife, Mora, to his two supremely sheltered children, David and Alexis, there appears to be too much chaos to keep everyone in line. However, Johnny Rose is always doing his best to pull his family out of the riches-to-rags scenario his crooked money manager tossed them into.

Tough loving is the name of the game when it comes to Red Forman from That 70’s Show. He’s not what you’d call the most politically correct individual, nor would we call him the most openly affectionate. Despite Red’s constant attempt to find solitude and isolation, his home is continuously overrun by teenagers brought into the house by his two teenage kids. Occasionally, Red softens to show real genuine concern, consideration, and love for each of the kids in his life. Which, in contradiction to his naturally stern and irritable demeanor, makes these sweet moments all the sweeter.

Did We Miss Somone?

Well, there you have it! We’ve rounded out our list of TV’s most iconic dads. Think we missed someone? Tell us below in the comments!

May 24, 2021
Comments
Héctor M Castillo
My Favorite Bakery Products made with the best quality products
Reply
Collin Street Bakery
Thank you so much for your kind words!
Reply
Charles E Gehm
How about Andy Griffith as Sheriff Taylor, The Any Griffith show; and Mr. Cunningham from Happy Days; Father Knows Best; Patty Duke Show; Gidgets daddy; Bill Bixby, Courtship of Eddie's Father; Mr "B", Hazel; Uncle Bill, Family Affair; Dr. Stone, Donna Reed Show; Danny Thomas, Danny Thomas Show. I do agree with Tim Allen. The others are VERY debatable.
Reply
Barbara
I agree with Tim Taylor, but what about Jim Anderson of Father Knows Best; Ward Cleaver, Leave it to Beaver; Steven Douglas, My Three Sons; Ben Cartwright, Bonanza.....those where all dads who spent time and taught their children.
Reply
Elvis
I came looking for kurtwood smith as Red Forman and I was going to dismiss this page if he wasn't there, only to find out that he's at the top
Reply
Leave your comment
Search The Blog
Recent Posts
Categories
© Collin Street Bakery Accepted Payment Methods
Registered Customers
or
Login with Your Social Profile Login with
or
Login with Your Social Profile Login with