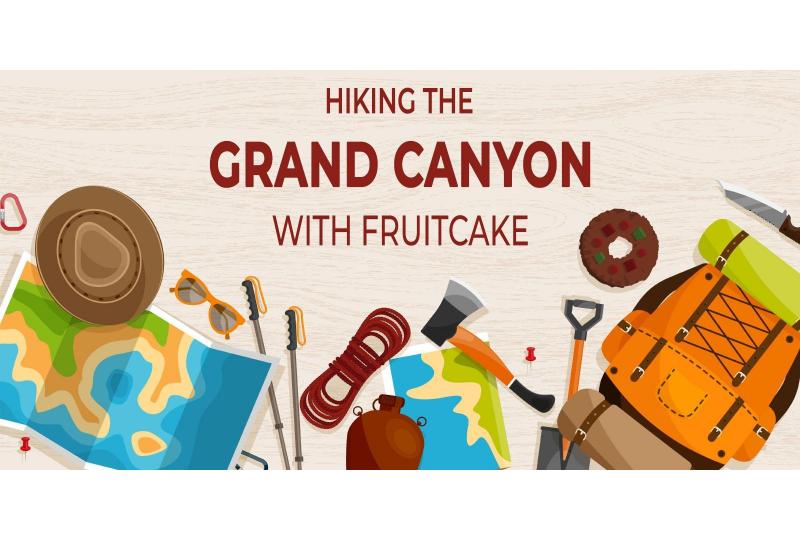 Click Play To Hear A Preview Of Our Interview With Tim Hoime!

Read The Full Story Below

My name is Tim Hoime and I completed the Rim to Rim hike on May 20, 2018. I am sixty years old and for the past 40 years, I’ve had a love for hiking and the outdoors.

The Rim to Rim hike traverses a portion of the Grand Canyon, beginning at the North Rim and stretching to the South Rim. The trail itself is a rugged twenty-four-mile trail consisting of rocky and sandy terrain. NOTE: A short diversion over to Ribbon Falls adds another 1.8 miles, so the total mileage was just over 26 miles.

At its deepest, (Colorado River) the trail descends to a point 2,200 feet above sea level. This trail is considered fairly difficult taking into account both distance traveled and a considerable elevation change of over 10,000 feet.

There were twenty-five hikers in our group, twenty-two hikers and three volunteers (driver's, beer runners, and etcetera). Our ages ranged from sixty years young (that’s me!) to twenty-seven years old. We were an eclectic group, consisting of physical therapists, physicians, personal trainers, salespeople, and military personnel.

As for our group, this was the 2nd trip for fourteen of our hiking party, and the 1st Rim-to-Rim experience for nine individuals!

Two of the more adventurous in our group added another twenty-three plus miles to complete what's known as the R2R2R hike; that means hiking from the North Rim through the canyon to the South Rim and then turning around to hike all the way back to the original starting point at the North Rim.

A quick shout out and thanks to the Trilogy Hikers Club for providing a boatload, or rather a backpack load, worth of information and encouragement in preparation for this hike.

I spent fourteen plus weeks preparing by training on various trails in the greater Phoenix area, including most Tuesday hikes with the Trilogy Hikers Club. I also added ancillary training which included stair climbing, squats, and lunges. I’ve attached my training schedule as a reference. Additionally, I did lots of research on proper equipment, nutrition, and hydration. You’ll read later about how this paid off.

Due to increased temperatures, training in late spring in Phoenix can be tough. However, it gave me the chance to try various strategies to prevent or alleviate cramping - salty snacks and fruitcake seemed to work best, along with proper hydration and electrolyte intake.

We began our hike on a Sunday with a plan to cover the entire trail in one day. Now walking twenty-four to twenty-six miles in a single day means we had to begin our trek fairly early in the morning, around 5:30 am. We positioned ourselves on the north ridge of the canyon traveling south on the North Kaibab Trail.

The temperature on the North Rim that morning was decently cold, about 42 degrees Fahrenheit. However, we knew as the day progressed the temperature would steadily warm. What does this mean when it comes to wardrobe? Learn to love your layers! - It is critically important to be able to readily layer, shed, and re-layer throughout the duration of your hike.

Now when most people think of the Grand Canyon, they think dusty, dry, and barren. In a sense, they are correct! The Grand Canyon is in fact, a cavernous desert. Throughout the trip I was certain to take videos and photos, to try and capture some of the majesties of the canyon. Very few people also know the Grand Canyon contains pocket oasis’, teeming with water, vegetation, and wildlife. Unfortunately, the photos do a poor job translating the beauty of the landscape to film.

Also of note, here's a brief sermon about preparedness...

If you want your hike to be enjoyable, it’s important to take your preparation seriously. Hiking can be such an incredible experience. But when dehydration and hunger set in, it can be difficult to appreciate your surroundings beauty, let alone make well thought out potentially life-altering decisions. At one point on the hike, I was very relieved to have packed more than what I just needed because some folks appeared to have done very little research before attempting a hike of this magnitude.

With that said, I did meet a couple at one of the rest stops along the trail. This stop was called Indian Garden and is located about 4.5 miles down on the southern rim on the Bright Angel Trail. They had assumed the nine-mile (round-trip) descending hike from the Southern Rim would have been easy. However, they had forgotten the long-held trial credo “Hiking down is optional, hiking up is mandatory.”

With no food and only a 24oz bottle of water between the two of them, they were “bonking” (running out of steam). The next time I saw them, we were stopped at a location called the 3 Mile House; they were in pretty bad shape. I gave them a tab of GUE (electrolytes and vitamins), some salt tablets, and some fruitcake bites for energy. When I left the camp, they were still recovering before attempting the second part of their accent. I never saw them again after that. However, I’m am most confident they made it out of the canyon. I mean, there were no fatalities reported that day!

Now when it came to nutrition, I was sufficiently prepared with a well-stocked supply of electrolytes, tuna packs, peanut butter, jerky, fruitcake, nut, apples, as well as energy gels and chews. I stopped to snack about every forty-five minutes or so and drank continuously from my 100oz Camelbak pack.

I have always carried fruitcake with me when I hike primarily because it’s an excellent fuel source.
One, Deluxe fruitcake “Petite” provides about forty-five minutes of sustainable energy.

Additionally, my pack was well supplied with a first-aid kit, headlamp, extra socks, a knife, poncho, gloves, and my phone. On my hip I carried a .38 Special for protection... you just never know. Also, sometimes there can be pipeline breaks so it’s a good idea to have someone in the group with water filtration gear. On average the pipes break about once a month meaning it’s likely they could break while you are hiking. With a filtration system, you can drink from the local water supply without any issues.

One other thing of importance to remember while hiking is pace and rest. Both are extremely important and just like nutrition, can play a huge role in cognitive ability and overall hiking experience. Hike at YOUR pace and level of conditioning. For example, while on this trip, I noticed one of our own hikers struggling. We were about half a mile past the Colorado River and she was dehydrated and nauseous. She was most likely not eating or drinking enough water. This meant the rest of our ascension, about eight miles in total, was very difficult for her. She was a trooper and made it out albeit well after sunset.

My main rest stops were at Manzanita, Cottonwood, Phantom Ranch, Indian Garden, and the 3 Mile House. I was certain to take at least fifteen minutes at each stop. While at Phantom Ranch I did indulge myself in a nice feet soaking. It was the hottest at that location, a sweltering 94 degrees. While there, I also changed socks, bought an ice-cold lemonade, and sent a postcard to my wife which I saw carried out by pack mule.

Somewhere on the descent, between Cottonwood and Phantom Ranch, I was fortunate enough to cross paths with my Trilogy Hiking Club President, aka “Prez” Steve Halvorsen. Steve was taking the harder hiking trail traveling from south to north. That trek is considerably more difficult because the elevation gain going up the North Kaibab Trail is steeper and longer than going up the Bright Angel Trail on the southern side. When we saw each other, he was looking a little tired, but he made it out in around 17 hours.

When we had finally arrived at the Southern ridge, it was about 6:30 pm and the temperature was pleasantly hanging around in the mid-70’s. Our original group of twenty-five hikers had broken up into smaller groups based on traveling speeds. As it turns out, the group in which I had been segmented took about thirteen hours total, including rest. The quickest group out of the canyon was about ten and a half hours total, including rest.

After finishing the hike, I reflected on what I thought would be included in my ultimate hiking checklist. I decided on the following...

All in all this hike was a great experience. I loved the trail camaraderie and was blessed to be able to speak with people from Norway, Germany, China, and Great Britain. I would most definitely do this hike again. In fact, I was so proud of this hike, I actually decided to get a tattoo inspired by this accomplishment.

Again, I want to thank members of the Trilogy Hikers Club who provided insight and support during my hike preparation. Happy trails and… “Eat more fruitcake; spread those crumbs around”!

If you would like to take some Texas Pecan Cakes on your next outdoor adventure...
CLICK HERE to order your Collin Street Bakery Fruitcake today!

To view maps of the hiking trails and plan a trip to the Grand Canyon visit - www.NPS.gov