One Pedal at a Time 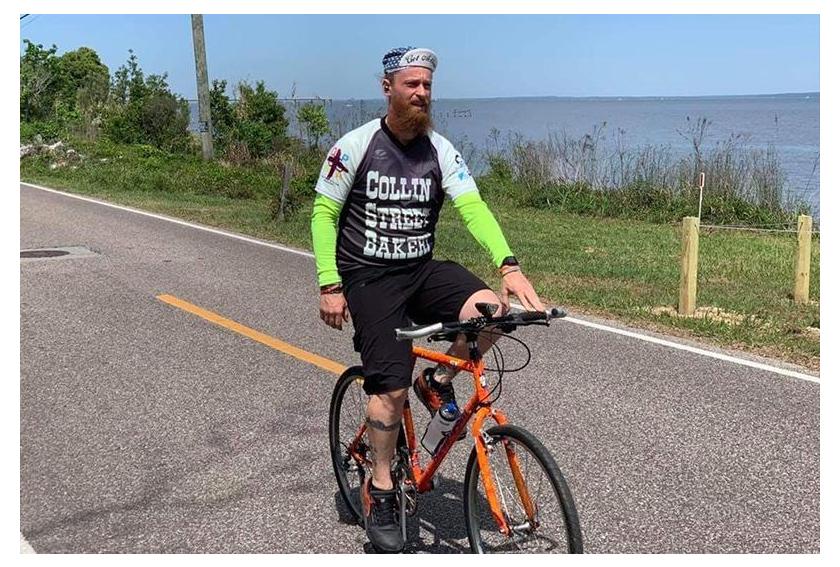 Posted in: Fruitcake As Fuel
No comments

Who is Dan Hurd?

He doesn’t have a house, but everywhere he goes, he has a home.

He doesn’t have a car, but he’s constantly traveling.

He doesn’t have a nine-to-five job, but he’s fiercely dedicated to his work.

He’s a survivor, a veteran, an entrepreneur, and perhaps one of the most inspirational human beings you’ll ever meet. Describing inspirational people can be tricky because words alone seem to lack the color, vibrancy, and depth required to paint the most accurate portrait. However, we’ll try our best. It all began, with a smile.

Meeting The Happiest Man On Earth

We first met Dan outside our downtown Corsicana offices on a beautiful, sunny Tuesday morning. Waiting patiently outside our bakery doors, we spotted a cyclist wearing a sleek red and yellow racing suit pedaling down 7th Avenue. Having done some research prior to our meeting, we knew to expect this as Dan’s singular mode of transportation.

We watched as Dan cruised into our parking lot, came to a smooth halt in front of our entrance, and swung a leg off his bike. Tugging off his helmet, he released a mane of wild, curly brown hair and revealed the biggest smile we’d ever seen. Extending his hand, he confidently introduced himself, exuding that kind of positive, relaxed energy that immediately puts you at ease.

Stepping inside, we casually chatted while he shared how he’d arrived at our offices that day. Having stayed the night with a former Navy buddy in the neighboring town of Waxahachie, it had taken Dan about two and a half hours to travel the roughly thirty-five miles to Corsicana. Before the day’s end, he was planning on logging at least sixty additional miles. His next destination was Waco, an estimated four and a half hour journey southwest from Corsicana. After Waco, he didn’t know which city he’d go to next, but he knew he was going somewhere.

This is how Dan lives his life. Only looking ahead one city at a time.

For most people, this kind of fly-by-the-pants lifestyle would cause anxiety. However, for Dan, it’s the only way of life and it’s been specifically designed this way to enable him to accomplish his life’s mission.

You see, Dan is the founder of the “One Pedal at a Time” movement. A movement designed to connect people through the sport of cycling, while starting a conversation about how to overcome life’s obstacles. It’s Dan’s steadfast belief any life challenge, big or small, can be conquered; he uses cycling as both the metaphor and the vehicle to deliver that message.

Cycling, a sport of extremes, is made up of long distances, unpredictable weather, and difficult terrain. The act of pedaling is not only physically demanding but mentally taxing. Riders grind, completing the same repetitive movement over and over, all in the effort of closing the gap between two destinations. The metaphor is subtle.

Cycling, just like life, is a sport of fortitude, persistence, and determination. The set of skills needed to weather long, difficult rides is the same set needed to endure difficult periods of life. Discovering this nugget of wisdom hasn’t been easy for Dan. On his way to enlightenment, he experienced years of personal hardships that threatened to push him to the brink of self-destruction. In the end, however, he prevailed.

To completely appreciate Dan’s future and his daily mission, it’s important to first know his past. So let’s back up and start at the beginning.

Where It All Began

From a young age, Dan has fought against life circumstances and hardship. Physically, mentally and sexually abused as a child at the hands of people he called family, Dan turned to drugs to numb the pain. He began smoking cigarettes at the young age of seven but quickly moved on to stronger substances. By the time Dan was a teenager, his drug use was extreme. He recalled a time in high school when the D.A.R.E. (Drug Abuse Resistance Education) program came to visit students. The program seeks to prevent the use of controlled drugs through youth education but for Dan, their visit provided a different kind of enlightenment.

”They brought with them a suitcase-like container that had a bunch of different examples of drugs inside,” said Dan. “I remember looking around inside that case and thinking I had tried just about everything in there.”

As he progressed out of high school and into adulthood, Dan’s anxiety and depression worsened. He enlisted in the Navy and was shipped off to basic training. As he recalls, “I remember thinking I wanted to die. I didn’t care to live. But if I was going to die, I was at least going to give my life serving and protecting my country.”

When Dan returned stateside, his anxiety and depression worsened. Fueled by continuous drug abuse and accelerated by his newly developed PTSD, Dan decided to take his own life. He tried on three separate occasions but was unsuccessful in each attempt.  As he remembers, “I was actually in the hospital recovering from my third suicide attempt when a buddy of mine asked me to go with him on a weekend bike ride. I said no, I didn’t want to go but he just kept asking and asking. So I went.”  Turns out, this was the trip that would forever alter Dan’s life.

”One pedal at a time. Left, right, left, right. Just remember that, and we will be home before you know it.”

Before that fateful weekend, Dan had zero appreciation for bikes or cycling. He didn’t even own his own bike, so he was forced to borrow his friend’s. Dan had grown up riding motorcycles, so a bike you had to self-pedal was lame by comparison. The weekend began with a reluctant Dan and low expectations.

Close to the end of the trip, something happened. Dan and his friend encountered a particularly rough patch of road. “I just wanted to quit. I wanted to stop,” remembered Dan. “But then my buddy told me ‘We’re just going to take this one pedal at a time. Left, right, left, right. Just remember that, and we will be home before you know it.’”

That mantra, "one pedal at a time" swirled inside Dan’s brain. Over and over he continued chanting, ‘One pedal at a time. One pedal at a time.’ He slowly realized while he was focusing on pedaling, his thoughts of suicide vanished. He was pushing forward, making progress. Pedal by pedal, he was closing the gap between where he was and where he wanted to be. His restless spirit had discovered a place of peace.

Upon returning, Dan made a decision. His life was worth living and he knew exactly what he was going to do with it.  He sold everything he owned, bought a bike, and began a cross-country journey around the continental United States.

His mission was pure and honest. Through cycling, Dan aspired to open a dialogue about the importance of mental health. He named his mission OPAAT or One Pedal at a Time, in honor of the mantra that opened his eyes to the joy of living.

Since his movement was founded back in March of 2018, Dan has traveled over 14,000 miles. Carrying all his worldly possessions with him from town to town, Dan survives off the generosity and hospitality of his friends and fellow Navy veterans. Through the Ride with Dan app, Dan is able to advertise what city he will visit next, enabling individuals to reach out and play host. If you’re interested in hosting Dan, keep an eye on his app!

As we walked Dan out, we thanked him for his time and bestowed upon him a few parting gifts, a box of our DeLuxe® Fruitcake Petites, and a Pineapple Texas Pecan Cake. As he motioned to leave, he’d paused here and there, chatting energetically with Bakery staff and customers. Without hesitating, he’d posed for pictures all the while smiling ear to ear.

Watching him from a slight distance, it’s hard not to feel hopeful. It’s apparent when speaking with Dan he hasn’t forgotten about his past, but his eyes are on his future. You see, when Dan speaks about his life before he founded OPAAT, his tone becomes measured and his words rehearsed. He speaks with the deliberate, leveled cadence of one who’s memorized a speech. Comparatively, when Dan speaks about his organization and his newly founded purpose, his eyes become bright with enthusiasm, and his voice is full of expression. It’s as though Dan physically embodies the idea that what has been has shaped him, but does not define him. As he puts it,

"My story is about my future.”

Finally making it outside the bakery we said our last goodbyes. As Dan slung a leg over his bike, we noticed a sign strapped to the front which read, “Make a stranger smile. Be the change.” Once mounted, Dan glanced back over his shoulder, smiled, and pushed off. Gliding smoothly out of our parking lot and up the street, we found ourselves waving after him. Pausing for a moment to appreciate Dan and his mission, we realized we were smiling...

Collin Street Bakery is proud to announce our intention to sponsor Dan and his One Pedal at a Time movement. If you yourself would like to become a sponsor, please check out his website Ride With Dan, and share your support by leaving a comment in the section below!