The State Fair of Texas: A Lone Star Tradition 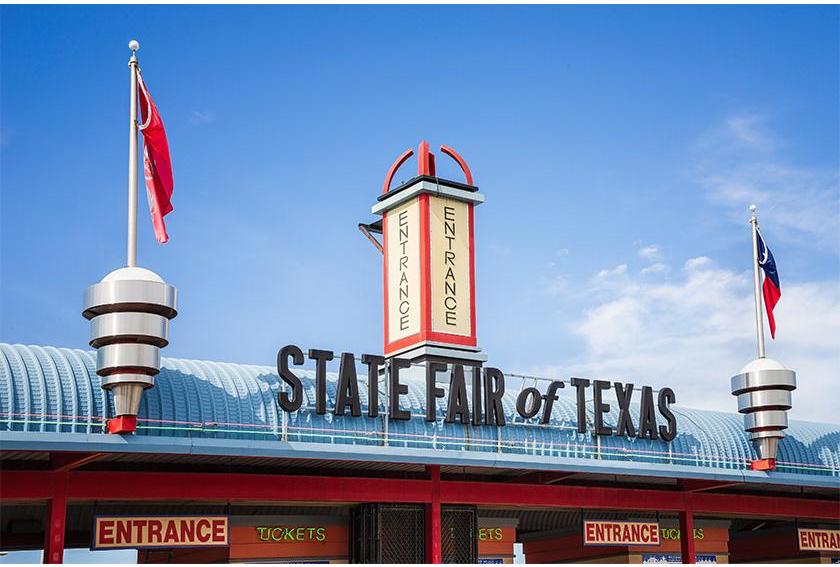 It’s everyone’s favorite time of the year—Texas State Fair time! That means corny dogs, jugs of rootbeer, and funnel cakes. It also means being in the company of fellow Texans and fair aficionados. Remember, it’s been almost two years since we’ve all been able to gather at Fair Park to enjoy music, food, rides, and exhibits. But, fingers crossed, those necessary days of social distancing are hopefully behind us. So, that’s why this year, more than ever, Collin Street Bakery is excited to announce our expanded participation in the Texas State Fair. So, as you begin planning your trip to the fair, we thought we’d let you know where you can find us—just in case you want to stop by and say ‘Howdy!’

But first, some Texas State Fair history, just to wet your whistle for the fun to come. 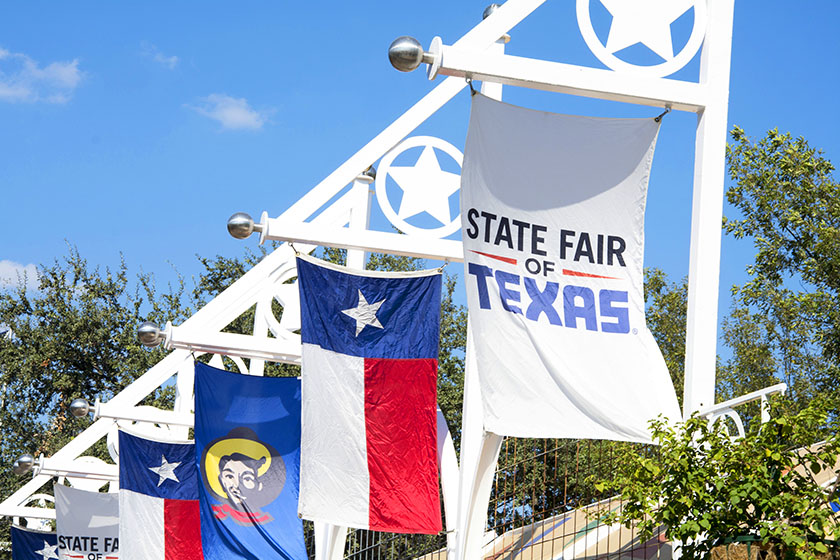 About The State Fair of Texas

Known for celebrating all things Texas, the Texas State Fair was started in 1886 with the intention of educating attendees on agriculture in a family-friendly fashion. Currently, the fair plays host to roughly 2.5 million guests each year, a huge uptick from the 300,000 visitors recorded during its initial years.

However, the growth of the state fair is shocking considering its rather disastrous history. Just one year after the state fair’s inception, disagreements between fairground directors, the cost of land, and insufficient returns caused the fair to incur massive debt. Repeated fires, fluke accidents, and miscellaneous mishaps seemed to destine the state fair for doom. However, the fair managed to survive, and over the next 100 years, various innovations and changes drove the fair to thrive. 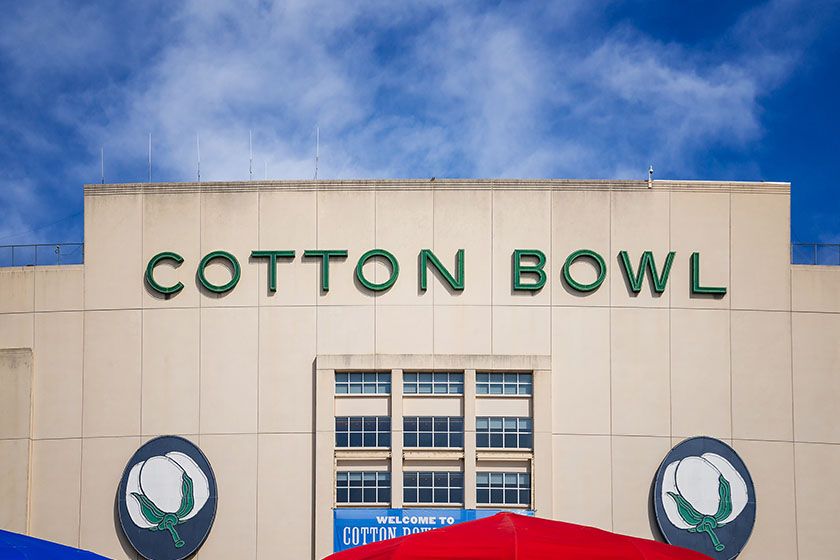 The 1920s and 30s brought with them significant investment dedicated to the fair—auditoriums were raised, the Texas-OU football game was established, and the Fair Park Stadium, later renamed the Cotton Bowl, was built. The 1950s debuted the monorail system, an international livestock show, and the first appearance of Big Tex. The 70s and 80s focused on establishing higher standards of safety for fairgoers and staffers alike. 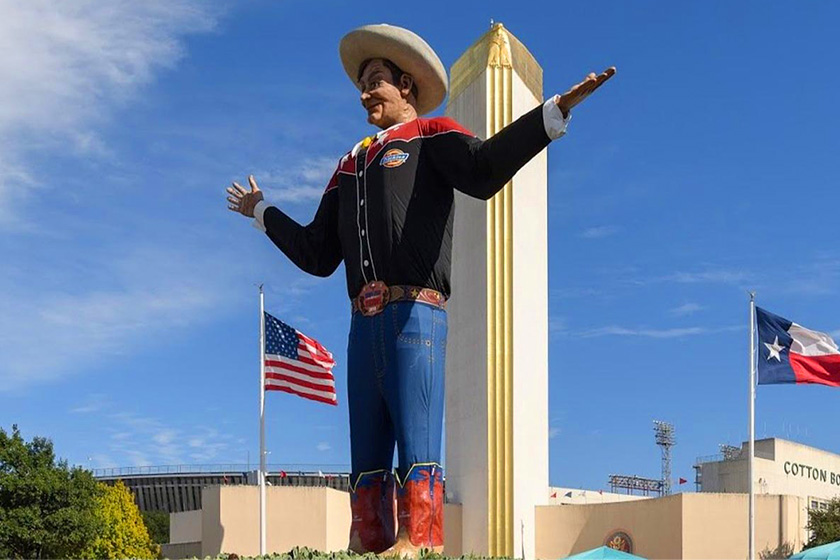 It wasn’t until 2012 when tragedy once again struck. An electrical short at the base of the beloved icon, Big Tex, started a huge fire. Dallas Fire and Rescue rushed to save the symbol of the Texas State Fair but were unable to do so. However, you can’t keep a good Texan down, and a brand new Big Tex was erected a year later.

Luckily, this was the last time tragedy struck. The state fair continues today to be a celebration of Texas heritage, embodying the best aspects of Lone Star culture. Its annual twenty-four consecutive day run prides itself on being not only the longest-running fair in the nation but, the longest-operating fair as well. That’s why, after serving as the Texas State Fair’s home for over a century, Fair Park was designated an official National Historic Landmark in 1986. 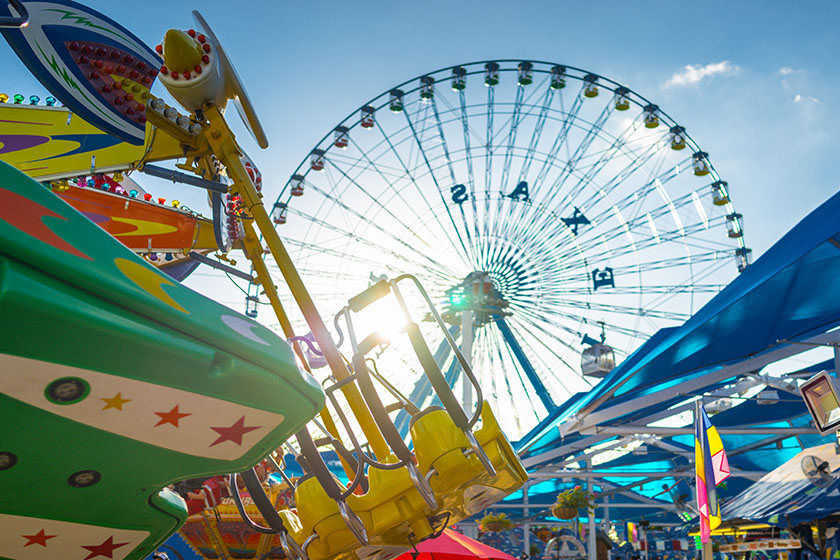 What Activities Are There at The State Fair of Texas

Because agriculture was and continues to be such a pillar of the Texas economy, its influence is a highly visible feature of the state fair. Participants can enjoy a variety of interactive exhibits, guided tours, and hands-on activities created to teach kids and adults alike about our state’s agricultural ongoings. These include petting zoos, discovery gardens, animal shows, and indoor growing exhibits.

The fair’s not solely about agriculture; it’s also about educating attendees about Texas’ rich history. Fairgoers are provided access to several exhibits highlighting the contribution of Hispanic and African American cultures to Texas’ growth and development. In fact, the fair houses the world’s largest collection of African American folk art in the country.

But that’s not all, the fair also hosts a rodeo, pig races, live music concerts, an arts festival, an Xtreme sports zone, magic shows, carnival rides, shopping booths, fireworks, and the annual Starlight Parade. For a full listing of all events and shows, visit the State Fair of Texas website’s Attractions & Events page.

Being a Texas-based family-owned-and-operated business, when the opportunity presented itself to partner with the GO TEXAN organization at this year’s State Fair, we said “HECK YES, TEXAS!” We couldn’t dream of a better way to showcase our Texas pride than by being featured in the exclusive GO TEXAN Pavilion. Now, some of you may be asking, “What exactly is GO TEXAN, and what is this Pavilion?” Good question. We’ll answer.

About 20 years ago, the Texas Department of Agriculture started the GO TEXAN Program with the intention of identifying, supporting, and promoting Texas-based businesses. This branch of the TDA works diligently not only to connect these local businesses with local customers but also with customers around the world! Certified GO TEXAN Partners bear the coveted emblem of the GO TEXAN branded logo, allowing shoppers to quickly identify locally-crafted products at a glance.

The GO TEXAN Pavilion is a huge building located on the grounds of the state fair where fair attendees are offered exclusive access to GO TEXAN products. Inside the Pavilion is the GO TEXAN General Store, a 3,000-square-foot retail space featuring all your favorite Texas-based brands. Visitors can peruse eye-catching displays, participate in interactive activities, sample delicious products, and even buy food, drinks, and various consumer goods.

And, of course, Collin Street Bakery will be there! We’ll be selling our world-famous DeLuxe® Fruitcake. So, while you’re walking around Fair Park soaking up some sun, swing on by! We’d love to see you. For more information about Collin Street Bakery’s involvement with the GO TEXAN program, click here. 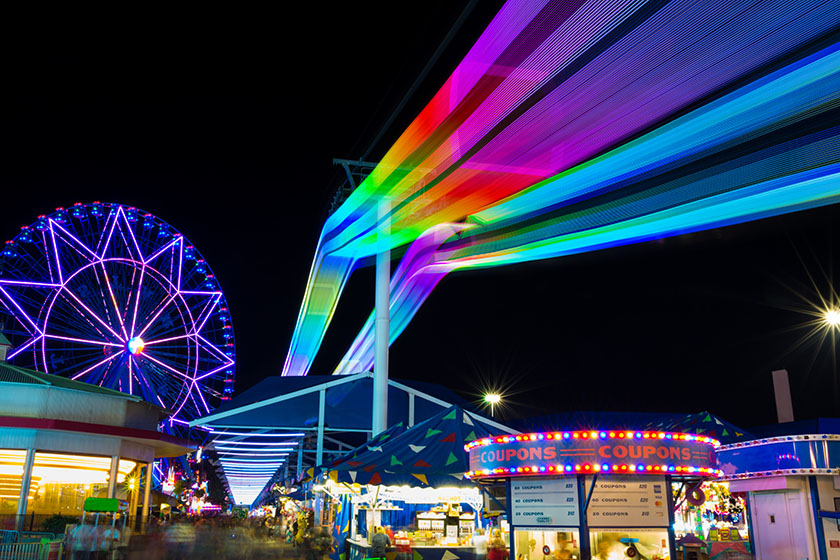 Who's Ready for this Year's State Fair?

All this talk has us craving fried Oreos and a large lemonade. So, what are you waiting for? Start planning your visit to the State Fair of Texas right now!

August 30, 2021
Comments
Mr David Gann
The best fruit cakes around l may not be able to come to the fairgrounds but I will be ordering some cakes Thanks David
Reply
Mrs Suzanne Reynolds
Am looking forward to the State Fair and the Collins Street Bakery. I purchase fruitcakes every year for family. spr
Reply
Donna Eichelkraut
Will you have your fruit cakes for sale at the State Fair?
Reply
Amando DeLeon
I stoped by to see you first day of the State Fair and picked up some items. But I went back today and can’t find you. Did you move?
Reply
Leave your comment
Search The Blog
Recent Posts
Categories
© Collin Street Bakery Accepted Payment Methods
Registered Customers
or
Login with Your Social Profile Login with
or
Login with Your Social Profile Login with